Low temperature, smooth, plastic, white-burning, refined dolomite earthenware for modelling or casting. Snow is available in a pugged plastic version and as a casting slip. This is the best choice for use commercial premixed glazes from companies like Duncan, Mayco, Gare, Spectrum, etc. 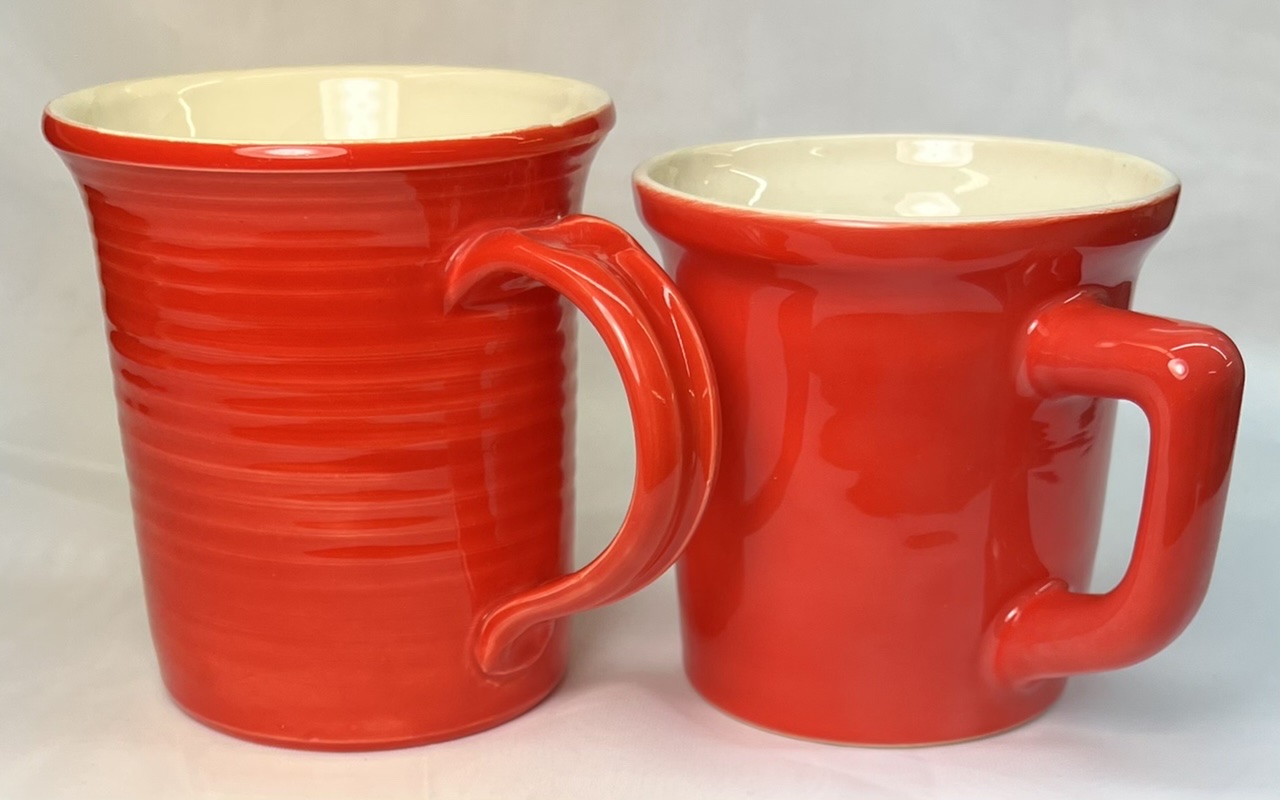 We have tested Spectrum 700 series glazes the most. On the left is Spectrum 748 fire engine red cone 04 glaze (three coats) on a thrown piece. On the right is Amaco V-388 underglaze covered with Spectrum 700 transparent (3 coats each) on a slip cast piece. Both Snow mugs were glaze fired to cone 05 and bisque fired to cone 04.

Jan 2022: The entire industry is phasing out of the use of talc, it happened suddenly. This new talc-free body replaces the former L213. It is better than L213 in some ways and has some disadvantages.

May 2022: Do not expect everything to be exactly the same as with L213. The most important things are: It is highly plastic, dries well, fires white, fits commercial glazes, produces strong ware at cone 06-04.

June 2022: Please read the section below about hydration: In damp climates bisque ware can crack if left out in the air for extended periods.

Snow is highly plastic yet drying performance is excellent (other plastic bodies we made require much more care. Snow is good as-is for hand-building and sculpture but can tolerate sand or grog additions (e.g. 10%) for making large sculptural pieces. 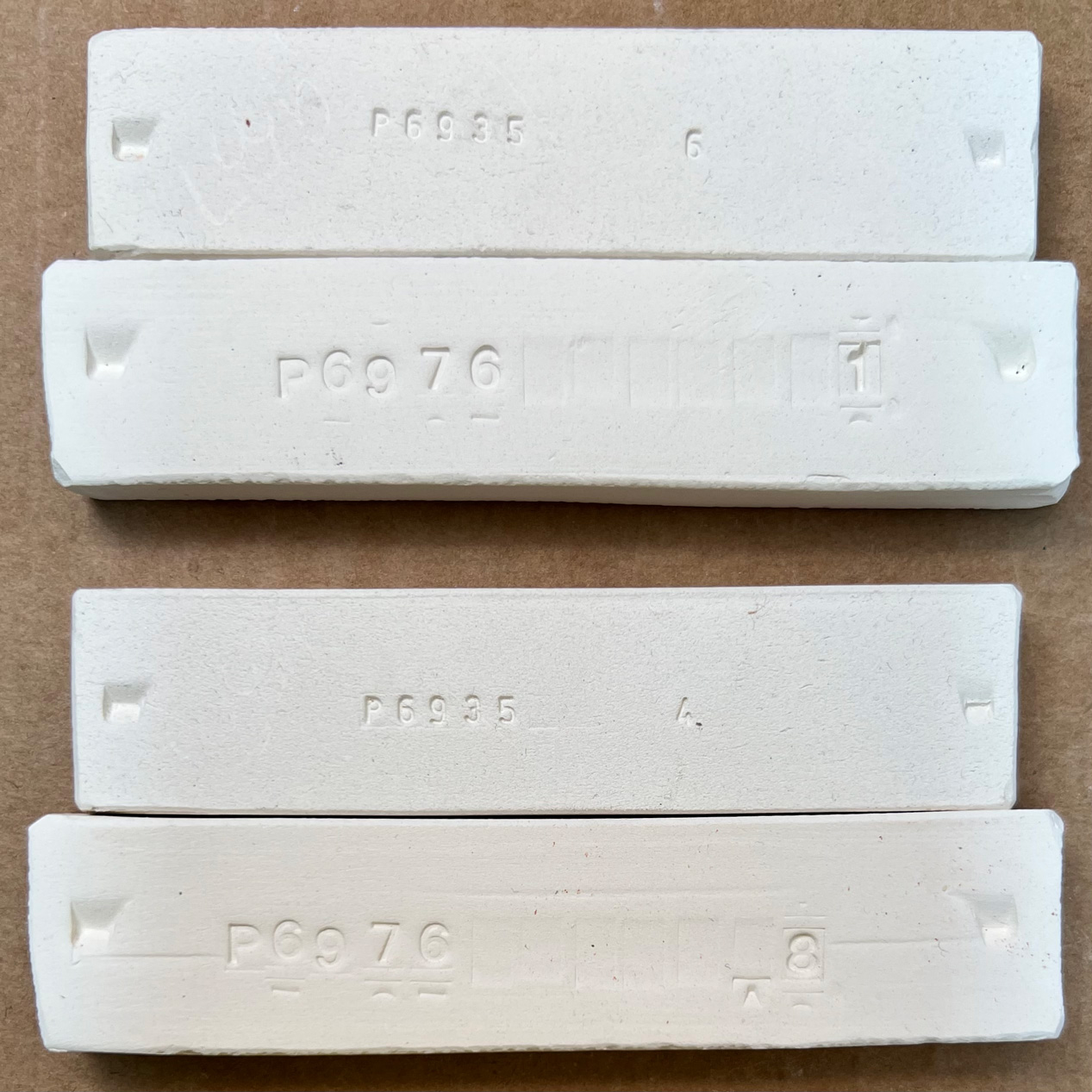 Snow burns very white from cone 06 to cone 2. This is due to the lack of a glassy phase (that darkens iron) and the use of special whiter-burning ball clay and dolomite. As a result, a transparent glaze (for cone 06-04) produces super white and colored glazes fire to brighter shades. We do not recommend any particular firing schedule, but faster firing can help if you find the glaze is soaking into the body to much. 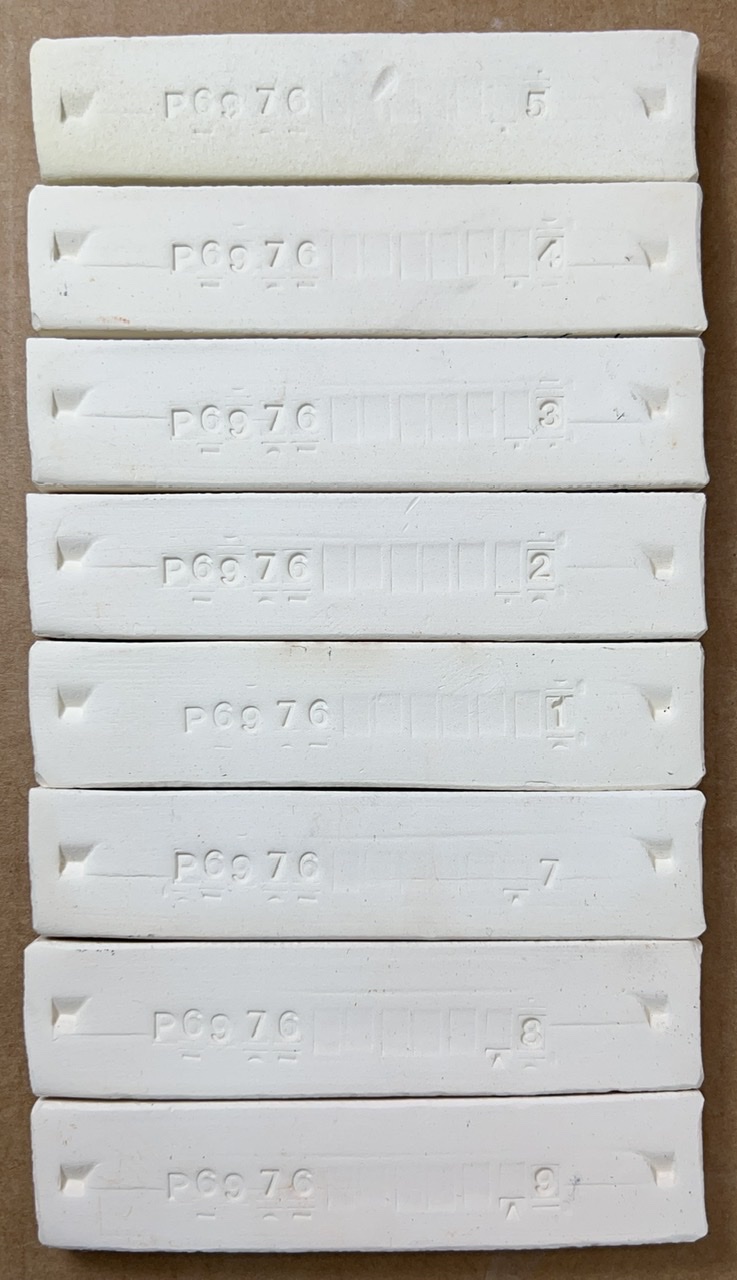 Snow also has a disadvantage compared to L213: High porosity, as high as 25%. However this has advantages. Snow clay has zero% fired shrinkage over a wide temperature range (as high as cone 4)! That means it is possible to make tiles that do not change in size or warp during firing. And ware made from Snow clay can be surprisingly resistant to failure on impact, likely because the porosity enables glazes to soak in more forming a better interface and strengthening the piece. Want to see a video of dropping a mug onto cement? Then click here!

Although cannot guarantee that commercial glazes will not craze or shiver we do test multiple types for fit. Regarding toxicity: Do not assume food safety of brightly colored glazes in your kiln without a leach test (e.g. GLLE test). Consider using a transparent or white liner glaze for food surfaces. 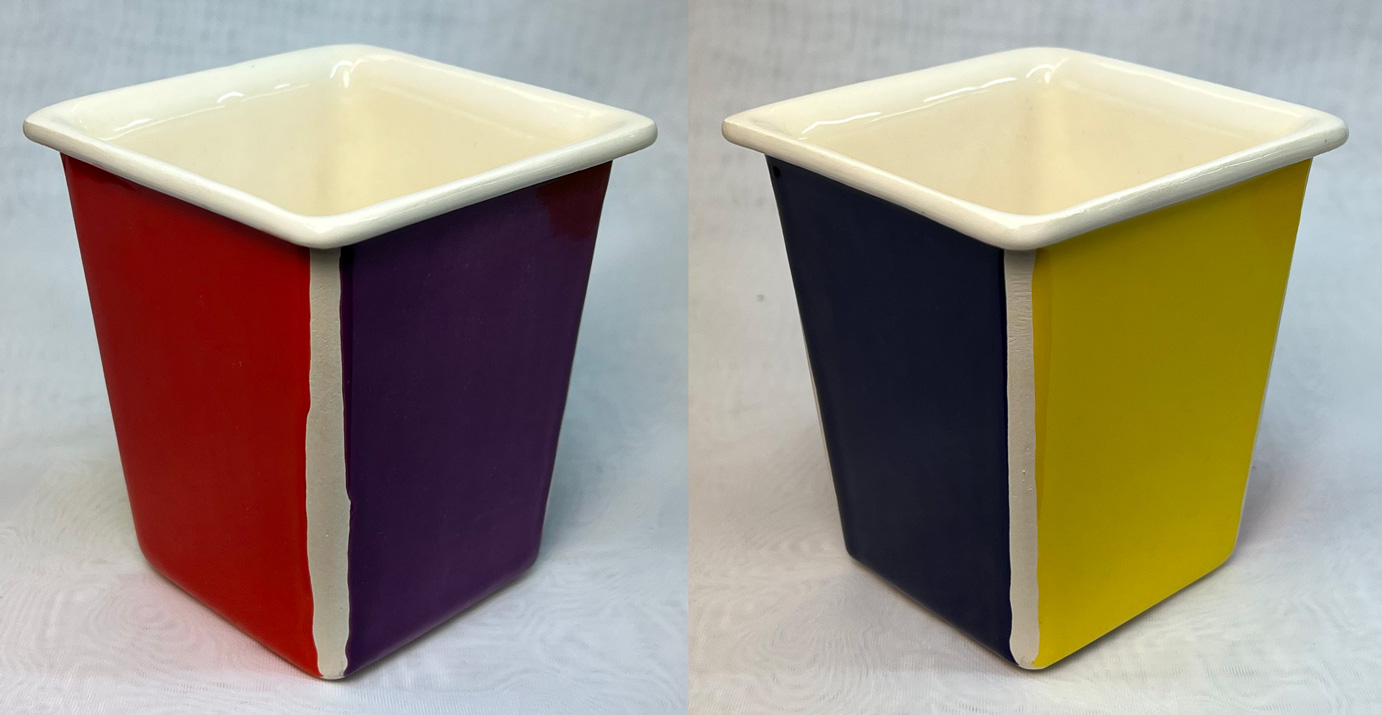 These are slip-cast pieces of Plainsman Snow. We are getting best results with Spectrum 700 series glazes. Shown here are Spectrum 753 Bright Yellow, 746 Bright Purple, 706 Royal Blue, 743 Bright Red, Inside: #700. Firing schedule was BTSG05, bisque was BTFB04. 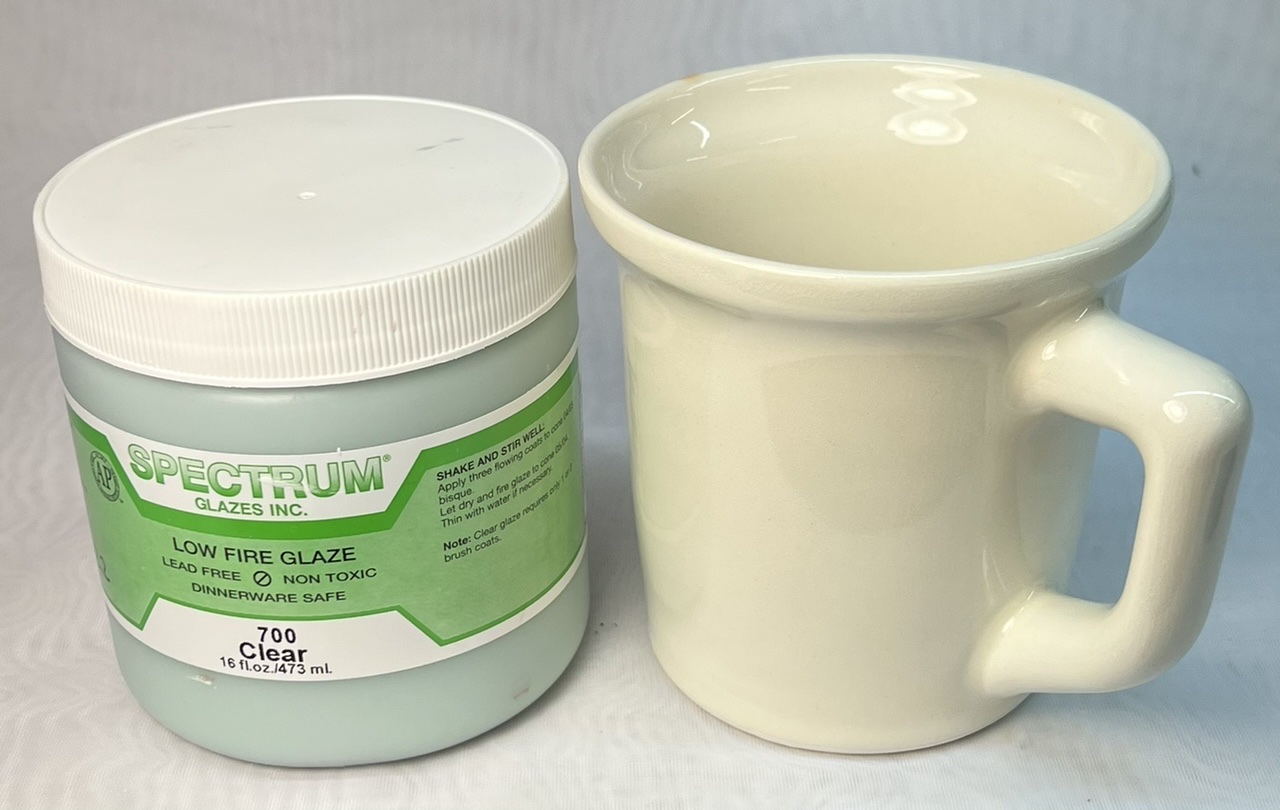 How many mugs can this jar of Spectrum 700 cover? About 7. This is Snow clay and 4 coats are needed.

Although commercial bottled products are expensive, they are convenient. It is practical to make your own dipping or brushing base glazes that dry faster and fit better (do not craze or shiver). Adding powdered stains is also possible. There is lots of documentation on how to make and mix our G1916Q and G3879 and recipes. Each of them has variations to enable tuning fit any body. It is possible to mix them as a brushing glaze, base coat or dipping glaze.

This body fires very white yet some transparents produce a yellowish surface (the dolomite is reacting with glazes of certain chemistries). We highly recommend Spectrum 700 as the clear glaze of choice (you may have to switch if your traditional transparent does not work well). Our G3879 dipping glaze recipe also produces a high-quality crystal clear.

Since Snow is more porous it can also absorb a glaze melt during firing. Consider four coats if this is an issue.

Dolomite hydration: Bisque firing dehydrates the limestone in Dolomite. While the dolomite particles are somewhat neutralized by being isolated and having reacted with the clay and feldspar particles, they still seek an opportunity to rehydrate, this will cause splitting. If you live in a damp climate, leaving bisque ware sitting around for weeks could cause failure. Do not wash bisque, glaze ware soon after bisquing and dry it as quickly as possible. Glaze all surfaces of ware if possible. If bottoms cannot be glazed then render them impervious to water penetration by using a silicone sealer. 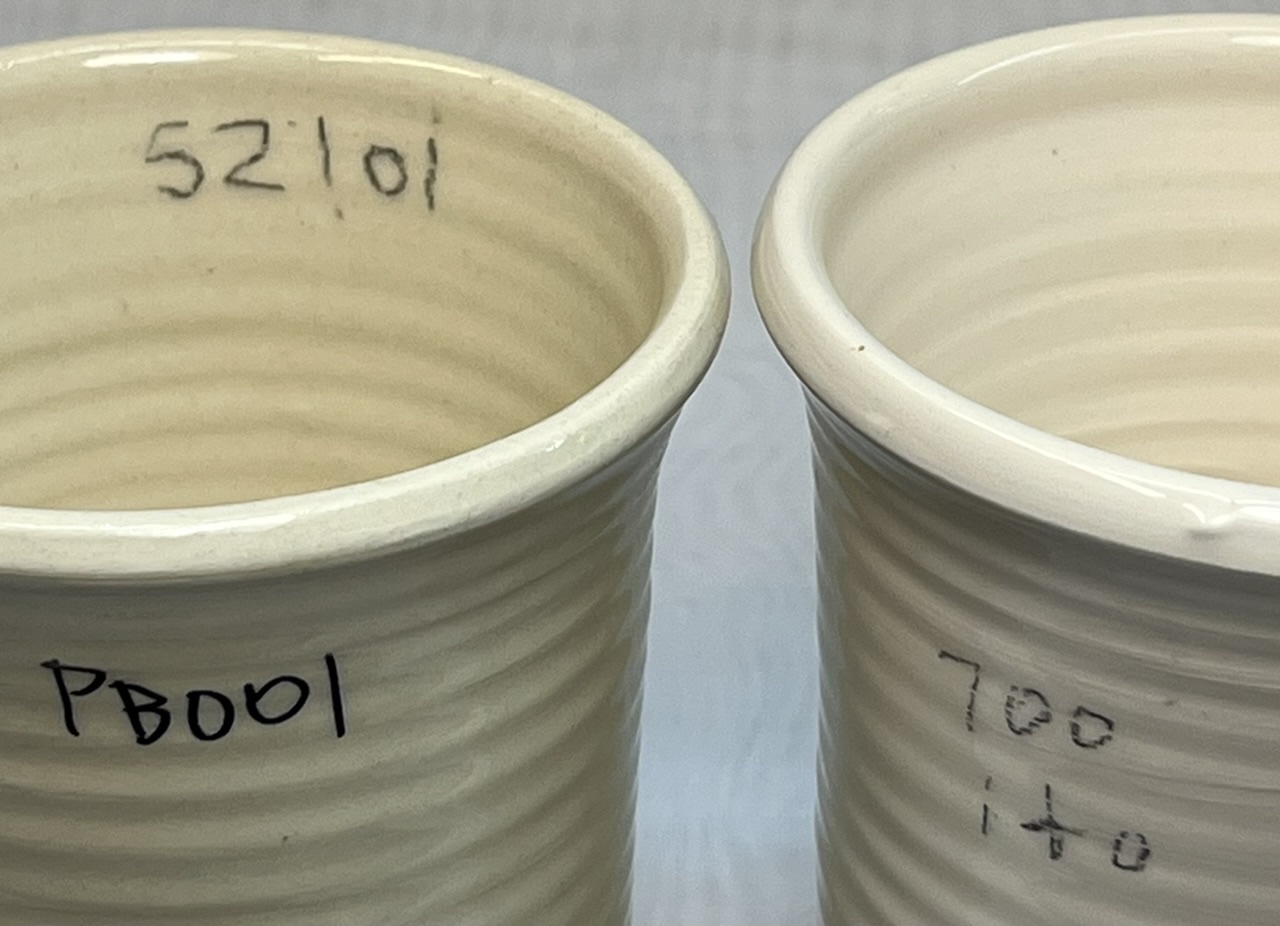 Snow clay with Mayco S2101, Duncan PB001 (left) and Spectrum 700 (right) Fired cone 05. No crazing after weeks on any of them. The 700 glaze fires much whiter than the Duncan or Mayco, the others appear to be reacting with the dolomite in Snow (they may contain zinc).

It is important to understand the principles of deflocculation, be able to measure specific gravity efficiently and have a good propeller mixer to make good casting slip. Snow is more easily over deflocculated that L213 was. You can recognize over deflocculation when objects cast much thinner on the same amount of time, the leather hard surface is rough, mold release more difficult and the Ford cup is less than 20 seconds.

In our lab we use the following recipe (Snow is referred to as L4410P, the lab test number). For sodium silicate/soda ash, consider holding back 2g/.5g (for Darvan 4g). Scale this up to the batch size that needed:

Snow requires more than double the amount of Darvan that L213 did. On initial mixing the slurry may appear too runny and thin (e.g. Ford Cup of 15-20 seconds). Take advantage of this and mix it really well because it thickens overnight. If you over deflocculate (it is too thin), add 1 gram of water-dissolved Epsom salts for each 3000g of powder in the mix (within a minute of propeller mixing the slip should thicken, repeat if needed). For maximum casting rate use the slip thicker (if a less even drain can be tolerated). The better the slip the more smooth the leather hard poured surface will feel. 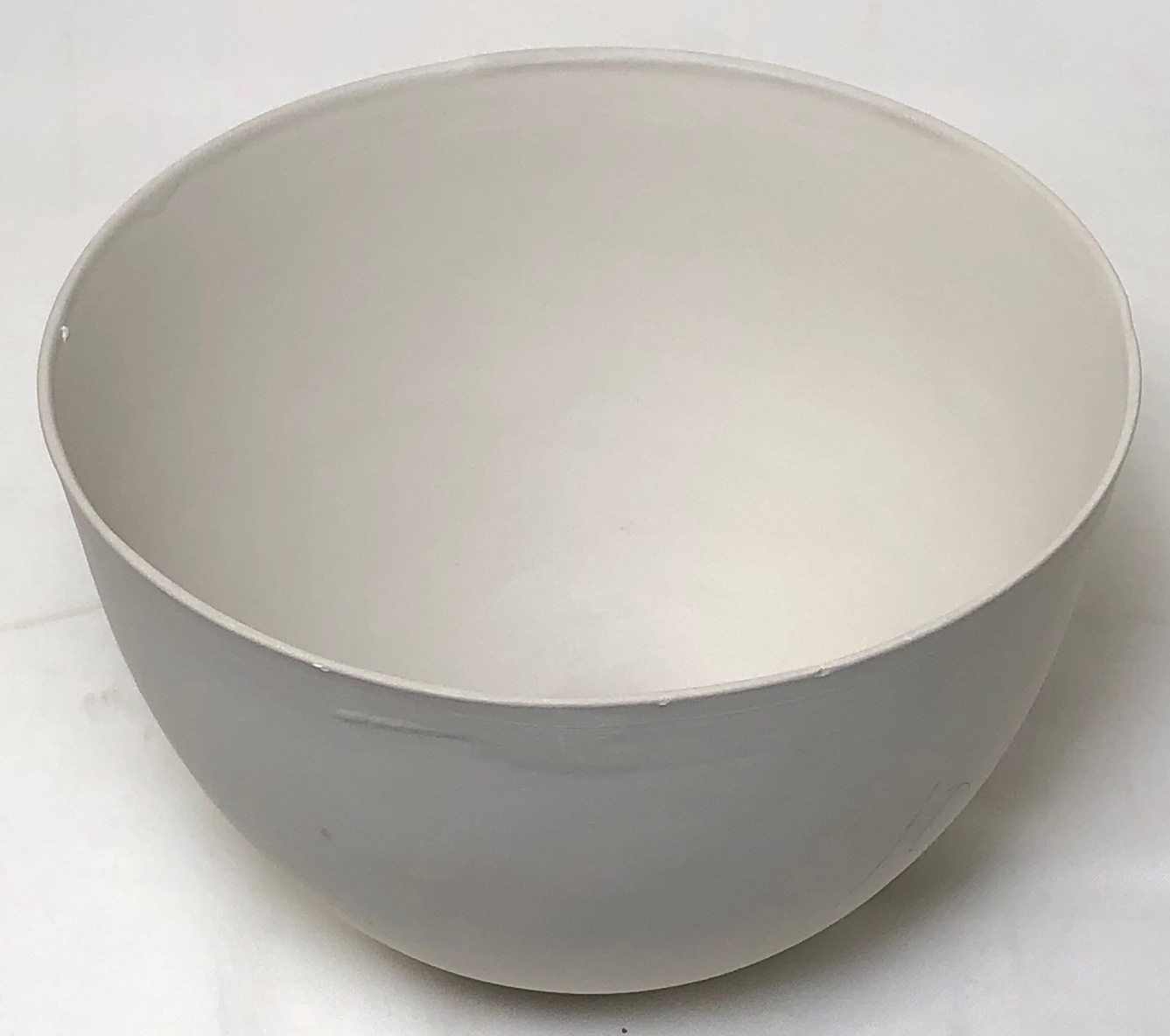 Low temperature whites have incredible casting properties. This bowl is 13cm across yet has a wall thickness of less than 2mm and weighs only 101g! It released from the mold with no problems and dried perfectly round. And when fired at cone 04-06 it will stay round!

We do not supply thermal expansion values. If a chart is supplied here, please view it only as a way to compare one body with another. Please note that, although you may calculate the thermal expansion of a glaze, this cannot be done for clay bodies since they do not melt. The best way to fit glazes to clay bodies is by testing, evaluation, adjustment and retesting. For example, if a glaze crazes, adjust its recipe to bring the expansion down, fire a glazed piece and thermal stress it (using an IWCT test, 300F into ice-water). If it still crazes, repeat the process. 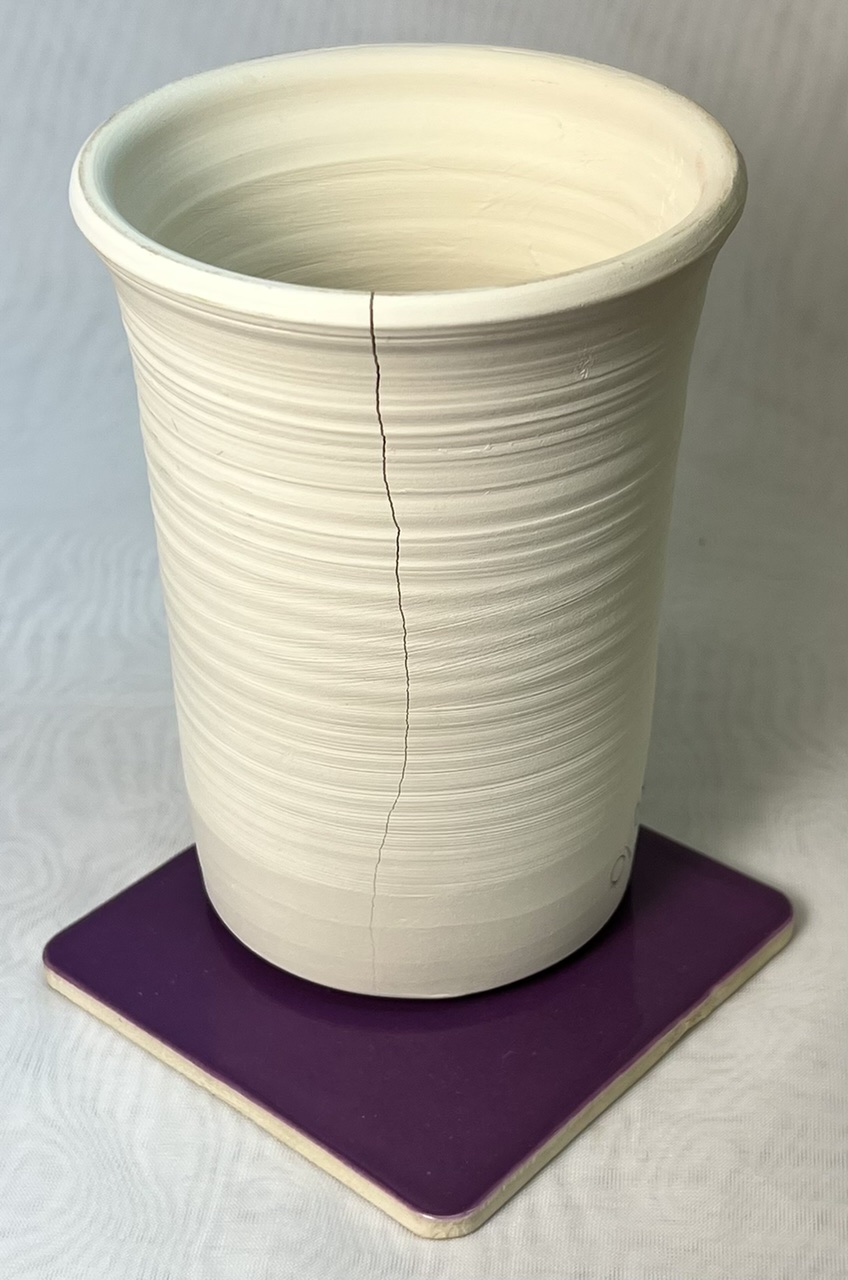 Snow clay, although high in Dolomite has proven to be very resilient, but not just in physical strength. This cone 04 glazed tile has not spalled despite cycling it three times through an hours-long water immersion and week-long freezer stay. The cone 04 bisqued mug has cracked after four years storage on a shelf in our lab (but it has 60% dolomite vs. Snow's 40%). 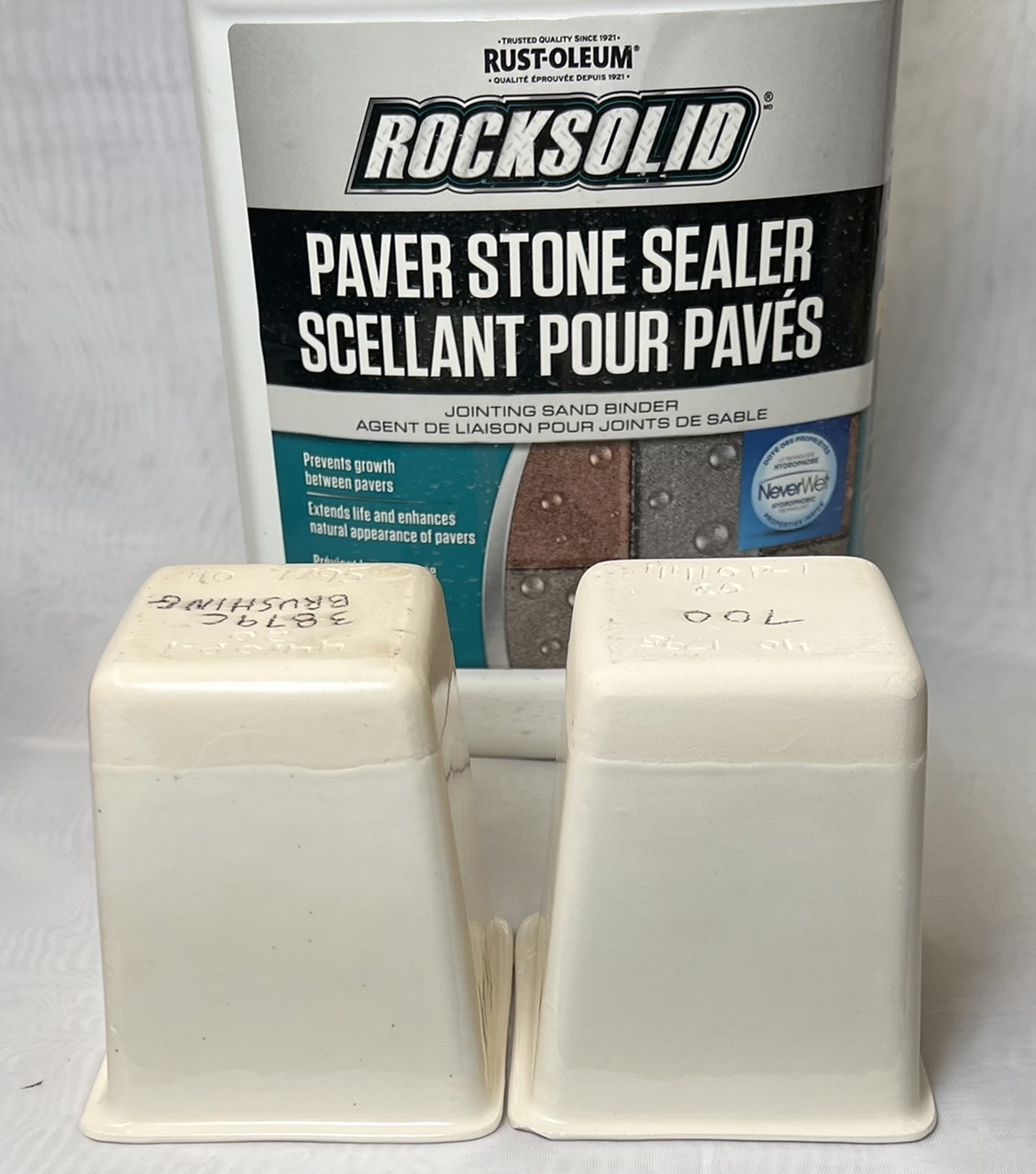 Plainsman Snow has high porosity, but this has an advantage: It soaks up silicone sealer very well. The slip-cast piece on the left was sealed (you can see the surface sheen) and it is impermeable to water penetration (the glaze is not crazed so water cannot penetrate there either). The piece on the right soaks up water readily (on the lower unglazed portion). All pieces made using this body should either have all surfaces glazed or sealed. 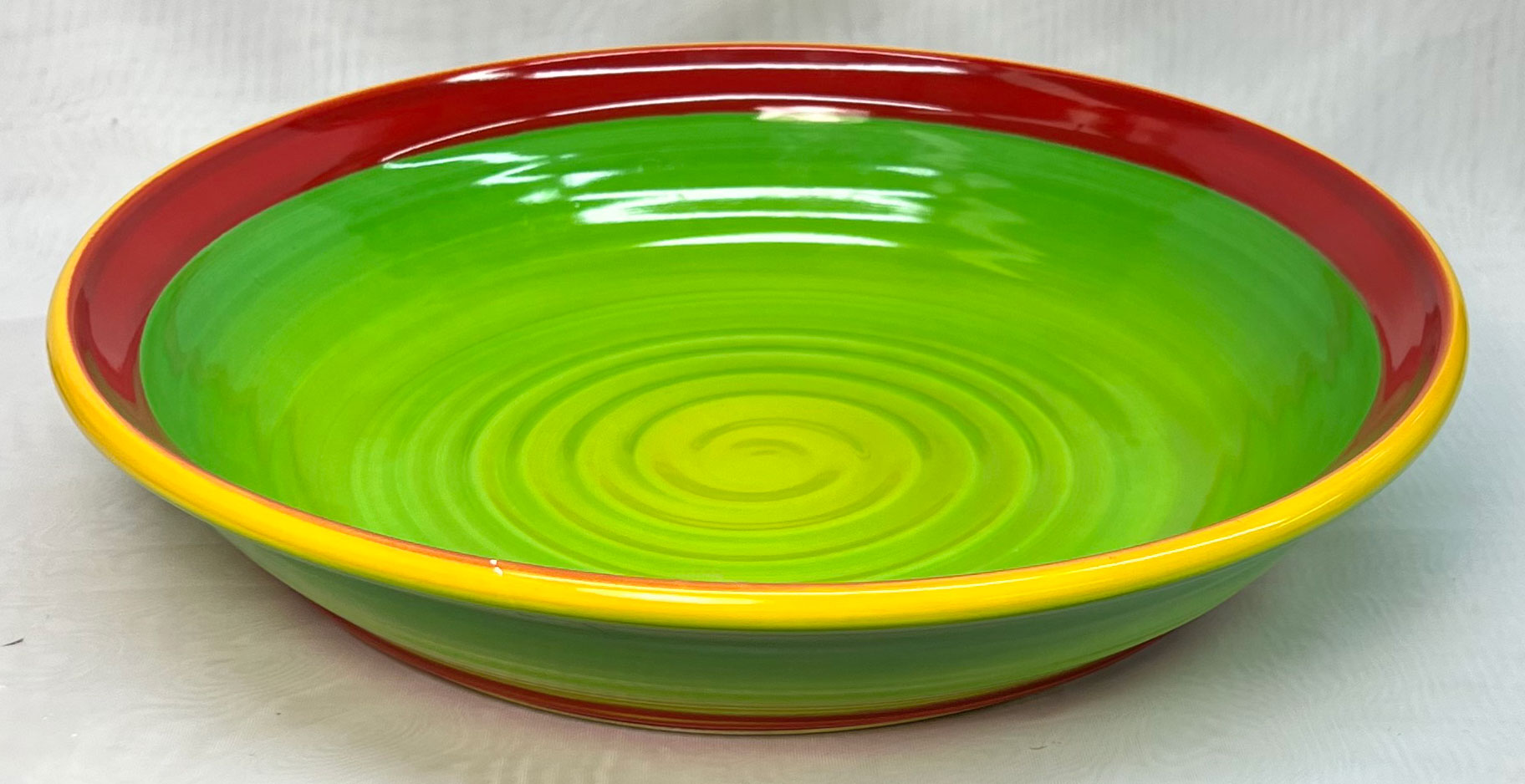 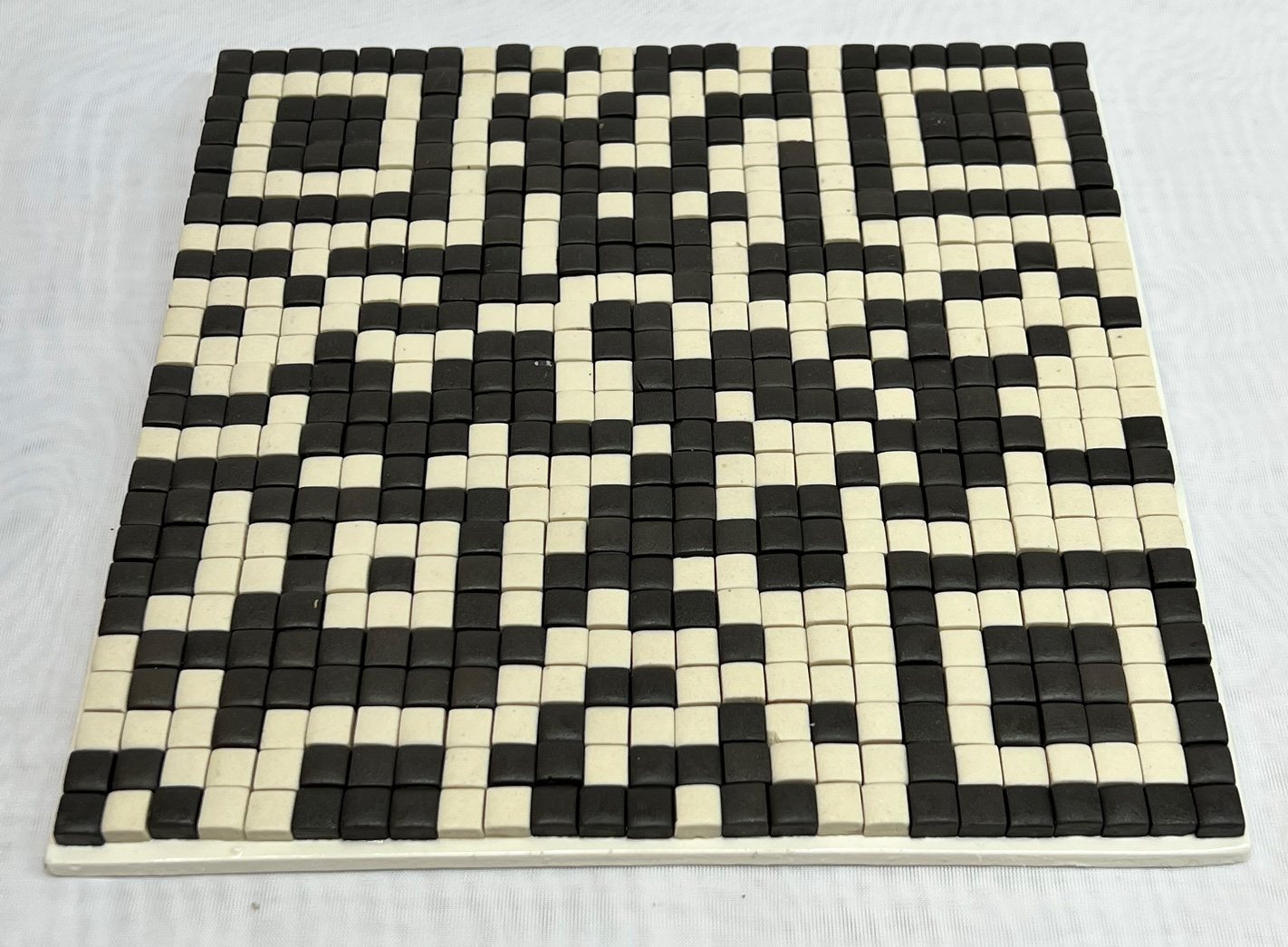 Plainsman Snow clay makes this QRCode mosaic possible. The tile onto which each porcelain pixel is glaze-glued is made of Snow. During firing to cone 04, it has zero shrinkage. And it does not curl up at the edges. All other plastic clays do both of those! Snow continues this performance for ten more cones (to 4). We silicone-sealed this work front and back, now it is ready for outdoor installation. 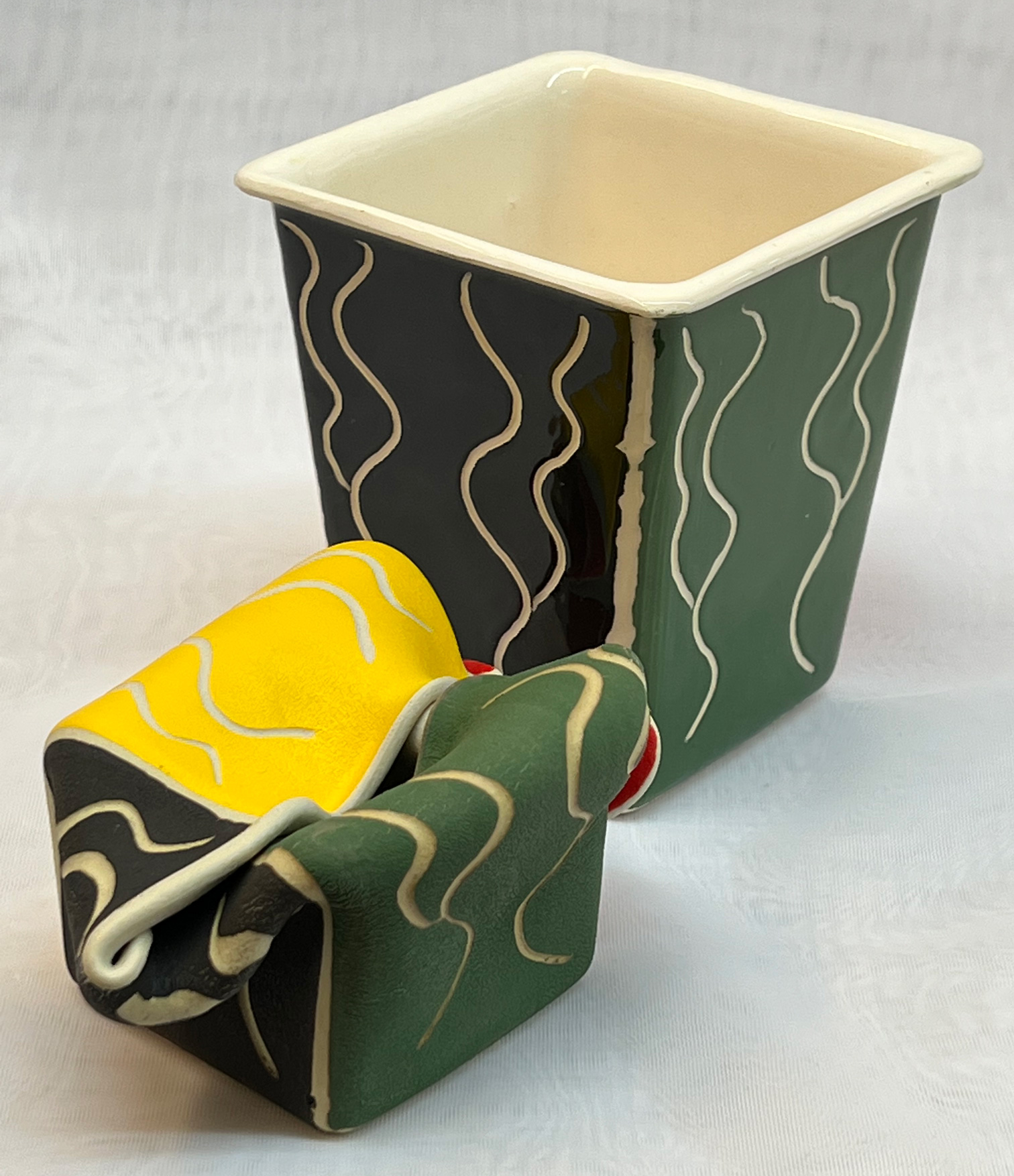 AMACO Velvet underglazes were applied to the slip-cast Snow pieces at the leather hard stage. The back piece was fired at cone 05. The front one went to cone 6, while this clay sags and warps at the high temperature it does not bloat and has not become brittle. The high porosity holds to cone 4, then suddenly drops through cone 5. 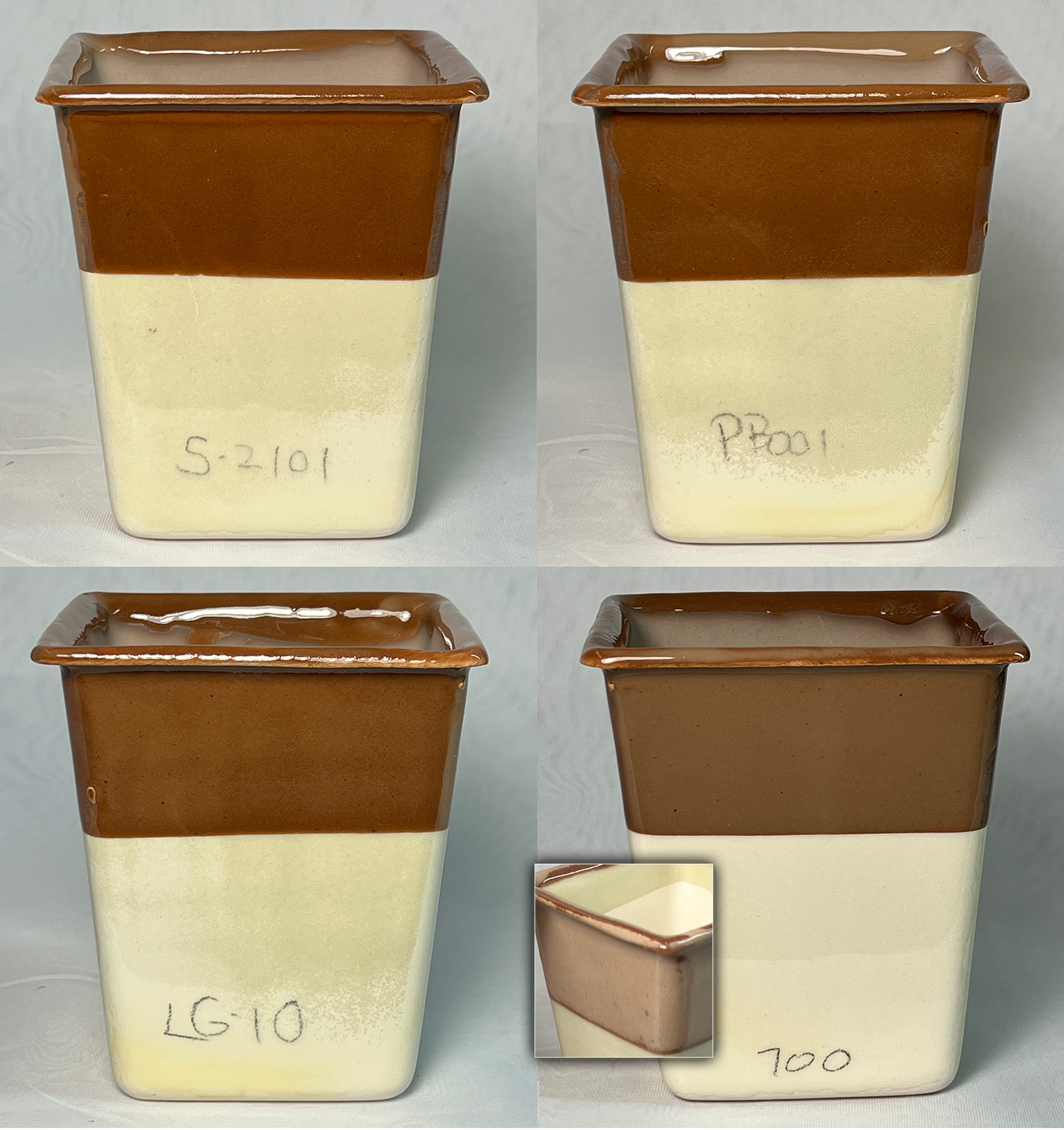 These are Plainsman Snow cast pieces with L3685Z7 stained engobe on the upper sections. They have been clear glazed with Mayco S-2101, Duncan PB001, Amaco LG-10 and Spectrum 700 transparent glazes. The left half of each has an extra glaze layer, that has not made much difference in any of them. The S-2101 transmits the brown color best, the LG-10 and PB001 a little less. The 700 is decidedly lighter, it is altering the brown color (likely MgO in the glaze is reacting with the stain). However, over the white body, the 700 is by far the best, being crystal clear and glassy smooth. The lower halves of these also demonstrate something equally interesting: The ones that don't alter the brown do react with the MgO in the white body, yellowing it and turning opaque in areas. The lesson is to try various brands of clear glazes over underglaze decoration and colored engobes, especially with dolomite-based low fire bodies. It might even be advantageous to use one brand on the insides of pieces and another on the engobe or slip-decorated exteriors.

Snow clay with G3879C brushing clear glaze and Amaco V-303 terra cotta underglaze on the bottom section. This mug looks like a terra cotta but has a much more flawless glaze surface than is normal on a terra cotta. 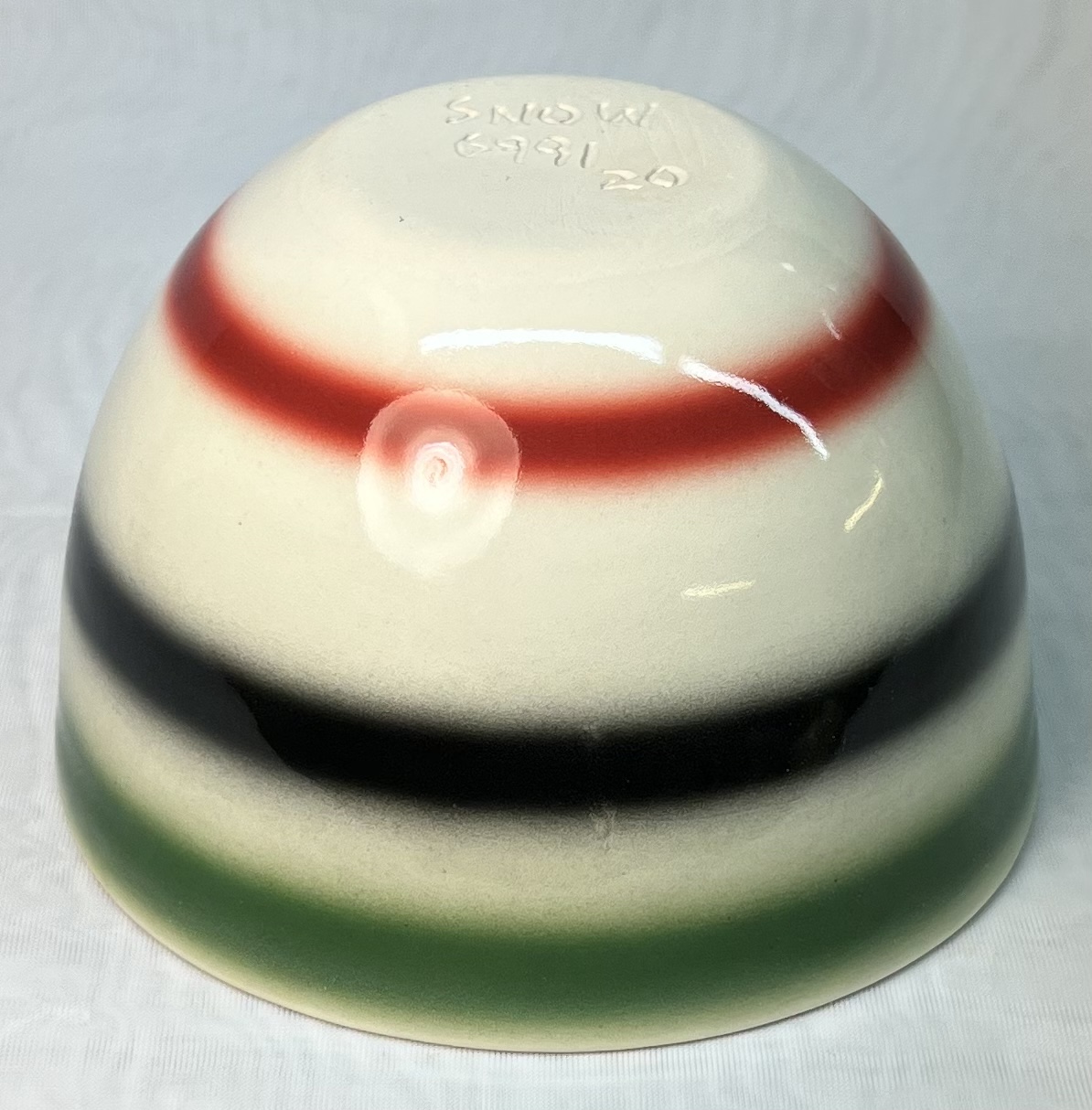