Mid-Fire Coffee Black is made from a base similar to H550 with a 10% addition of raw umber (naturally occurring pigmented clay). The umber colors the fired body and matures it enough for functional ware at cone 6. Coffee Clay is smooth and easy-to-throw. 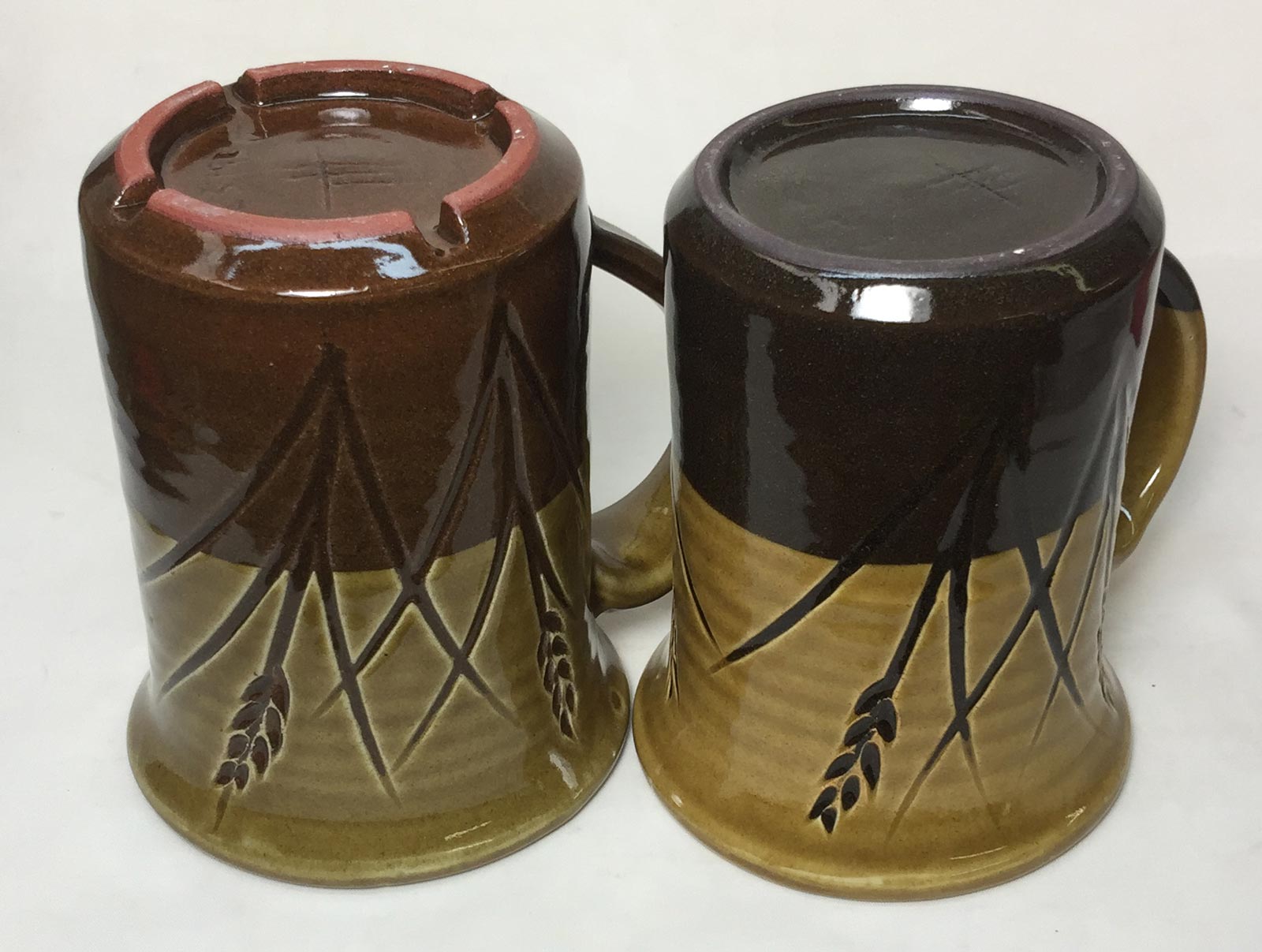 M390 vs. Coffee clay. The upper sections of the mugs are white engobed (using L3954B) under the amber-clear glaze. The glaze is Plainsman Alberta Slip base GA6-A (with Frit 3195).

Problems with black bodies from some suppliers: We tested existing products from a number of manufacturers and found serious issues (over-maturity producing bloating, warping and glaze bubbling; washed out glazes, jet-black colored pugged clay indicating use of raw MnO2).

Another option to get a blacker body

L3954B black engobe can be applied to M340, staining just the sections needed. The color is much blacker than Coffee clay.

M340 mugs with L3954B engobe (having a Mason 6600 stain addition). These are overglazed with GA6-C Alberta Slip Rutile blue on the outsides and Alberta Slip GA6-A amber base on the insides.

We rely on the consistency of raw umber to maintain the maturity and color of this body. Umber is a heavily pigmented raw clay and variation in supply is not only possible but likely. We recommend testing in your circumstances each time you receive a clay shipment having a different code number (the first four digits).

This clay is plastic, it throws and forms well (even if soft). It generates plenty of slip on throwing and is quite smooth. Raw umber is a natural soil/clay, so it has the same handling precautions as other clays.

Coffee clay is plastic. This 6" high vessel was thrown from fairly soft material and has not been trimmed. The photo has been enhanced on the left to make it easier to see. 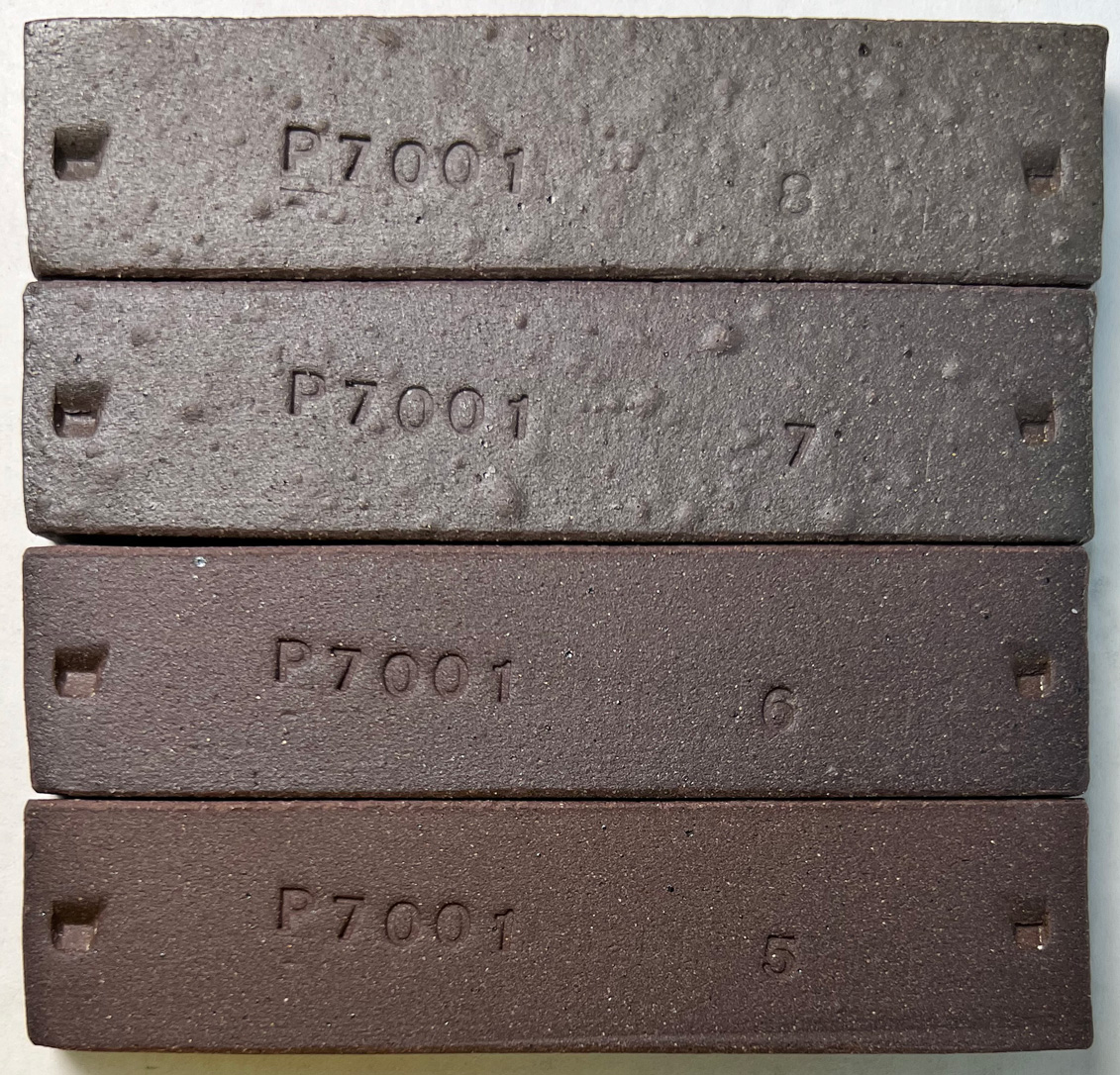 To develop color Coffee clay needs to be fired to 5-6 (center bar). By cone 7 it bloats badly (as the raw umber clay begins to decompose). It is thus vital that ware is not fired past cone 6.

Chemically, Coffee clay contains approximately 1% MnO. Maximum firing is cone 6, 2200F (because beyond that manganese fumes can be released as the raw umber decomposes). Use cones to verify that your electronic controller or kiln sitter is not firing beyond cone 6. For more toxicity information please see the article Managance in Clay Bodies at digitalfire.com.

Bisque firing can be done at the same temperature as other bodies (we bisque around 1850F).

To get the best defect-free surface please consider using a drop-and-hold firing schedule, for example the PLC6DS schedule. If crystallization during cooling is not an issue, glazes will give optimum results if slow-cooled also (e.g. the C6DHSC schedule).

Commercial brush-on glazes offer many colors and surfaces. For functional ware check for glaze fit (vital for quality functional ware). Do not assume food safety of brightly colored glazes in your kiln and with layering without a leach test (e.g. GLLE test). Consider using a transparent or white liner glaze for food surfaces.

However, base glazes that work on M340 may not work on this because of micro-bubble clouding (e.g. G2926B, G2934 matte). But Alberta Slip and Ravenscrag Slip glazes work well for us. Of course colorants in the body will bleed into glazes, often making them appear quite different than they would on lighter burning bodies.

Crazing: Functional ware must remain craze-free (crazing is unsanitary and drastically reduces ware strength). Even though ware may not be crazed out-of-the kiln it may do so with time. Do cycles of a boiling water:ice water immersions (BWIW test) on a piece to test glaze fit (by stressing it to bring out any crazing or shivering tendencies).

Coffee Clay works well with the standard white version of our L3954B engobe (visible on some of the pictures here). If G2926B crazes over it, consider G2926S.

This body is a great candidate for the engobe process, we recommend the L3954B recipe. It can be colored with stains or whitened with zircopax. It can be applied thickly as an engobe or thinly as a slip. 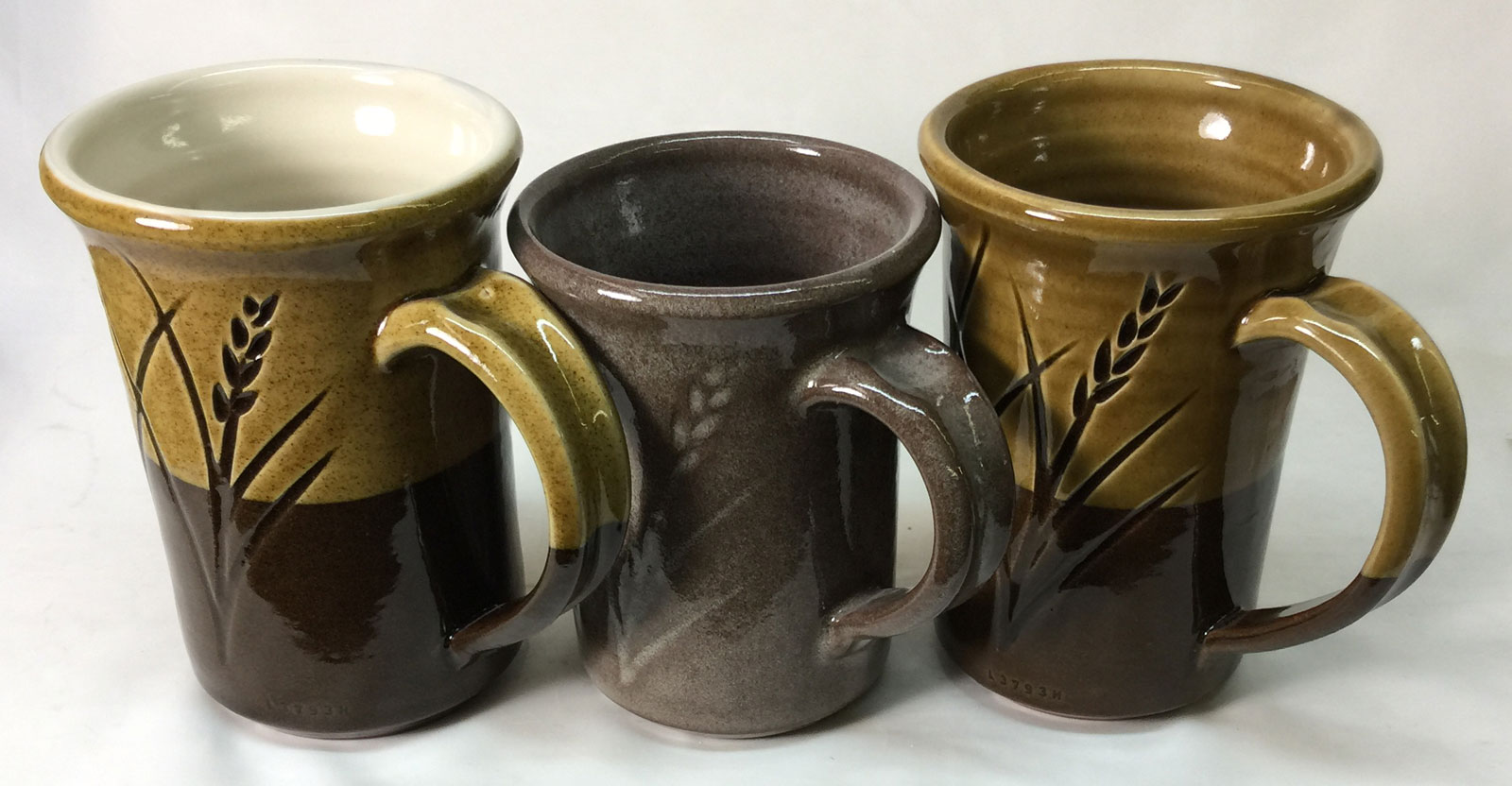 Clear glazes often do not work on dark bodies. The center mug is clear-glazed with G2926B (and is full of bubble clouds). This dark body (M390) is exposed inside and out (the other two mugs have the L3954B white engobe inside and midway down the outside). G2926B is an early-melter (starting around cone 02) so it is susceptible to dark-burning bodies that generate more gases of decomposition.

Left mug: The outside glaze adds 4% iron to G2926B (the glaze was not screened, so iron particles are agglomerated and acting as a fining agent, removing the bubbles). Right mug: The whole thing is glazed with GA6-B Alberta Slip base glaze. These amber glazes have an added benefit: The color darkens over dark burning bodies (to almost black).

Coffee Clay fits L3954B engobe perfectly. These bi-clay sandwich the body and engobe together, they have dried and fired perfectly flat (neither side has pulled or pushed to curve the bar). 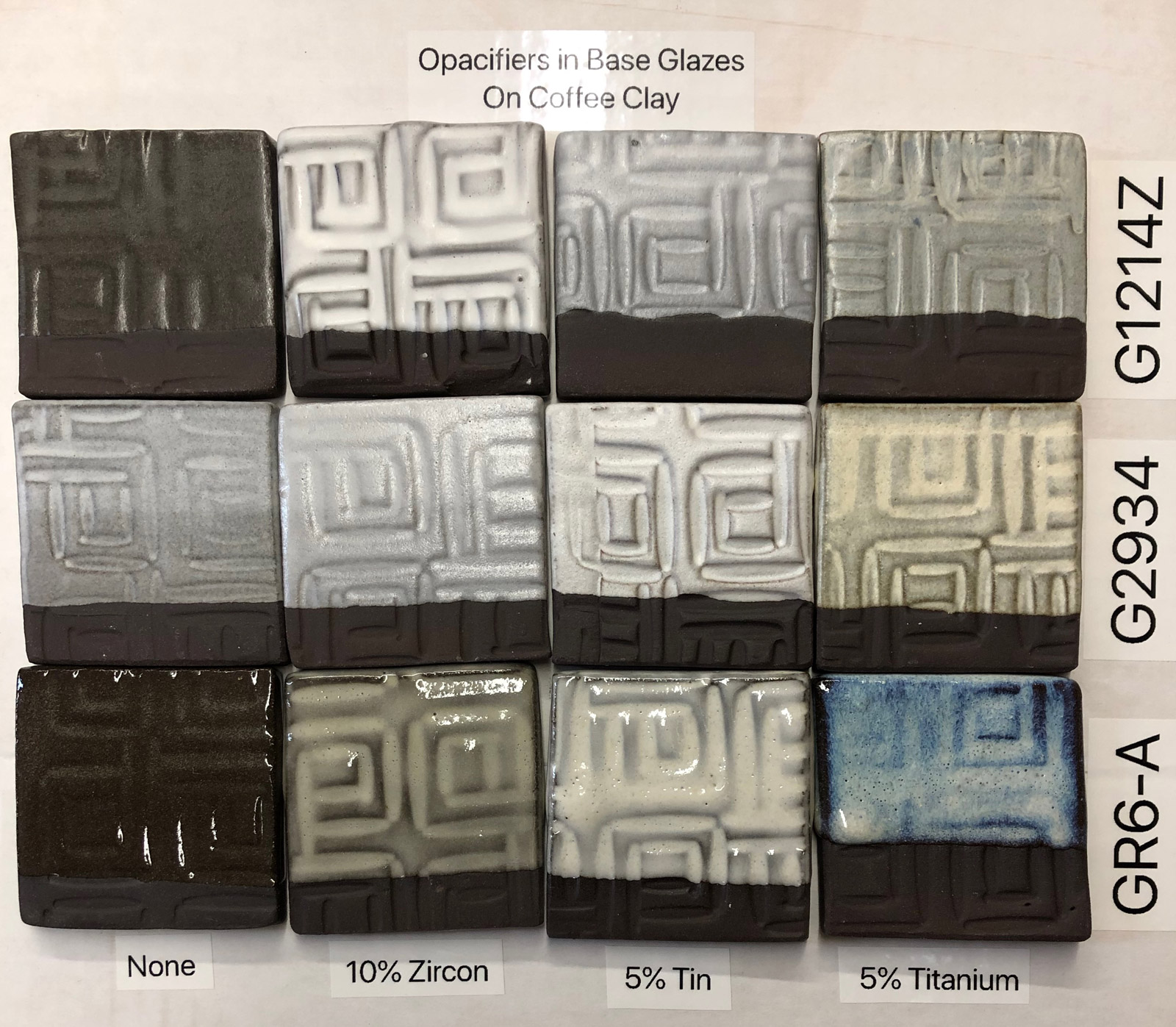 Opacifiers in base glazes on Coffee Clay 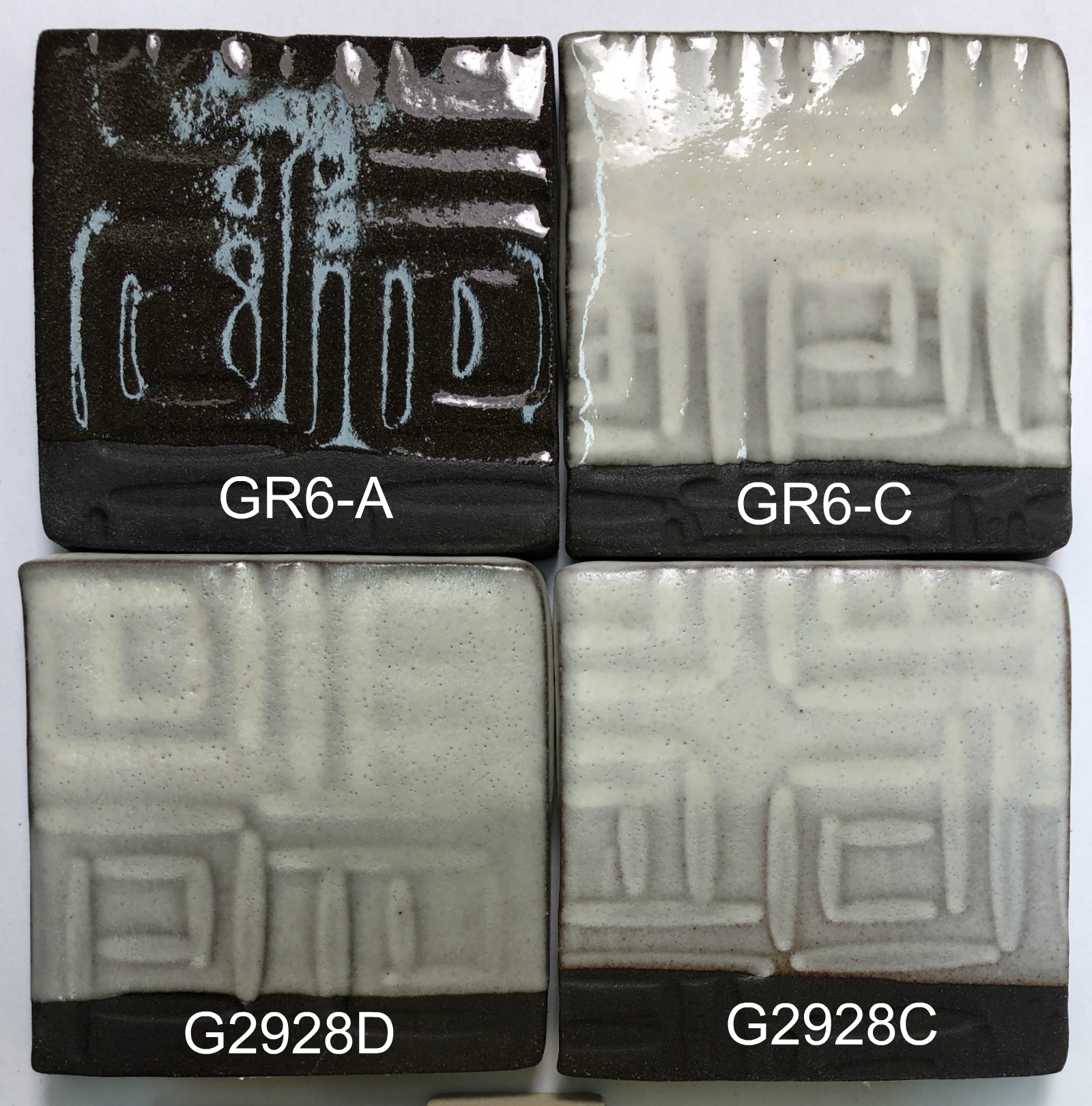 Coffee Clay with Ravenscrag base glossy, white and matte glazes. These were fired using the C6DHSC firing schedule. There are lots of small dimples on the double-thickness sections at the tops.

We do not supply thermal expansion values. If a chart is supplied here, please view it only as a way to compare one body with another. Please note that, although you may calculate the thermal expansion of a glaze, this cannot be done for clay bodies since they do not melt. The best way to fit glazes to clay bodies is by testing, evaluation, adjustment and retesting. For example, if a glaze crazes, adjust its recipe to bring the expansion down, fire a glazed piece and thermal stress it (using an IWCT test, 300F into ice-water). If it still crazes, repeat the process. 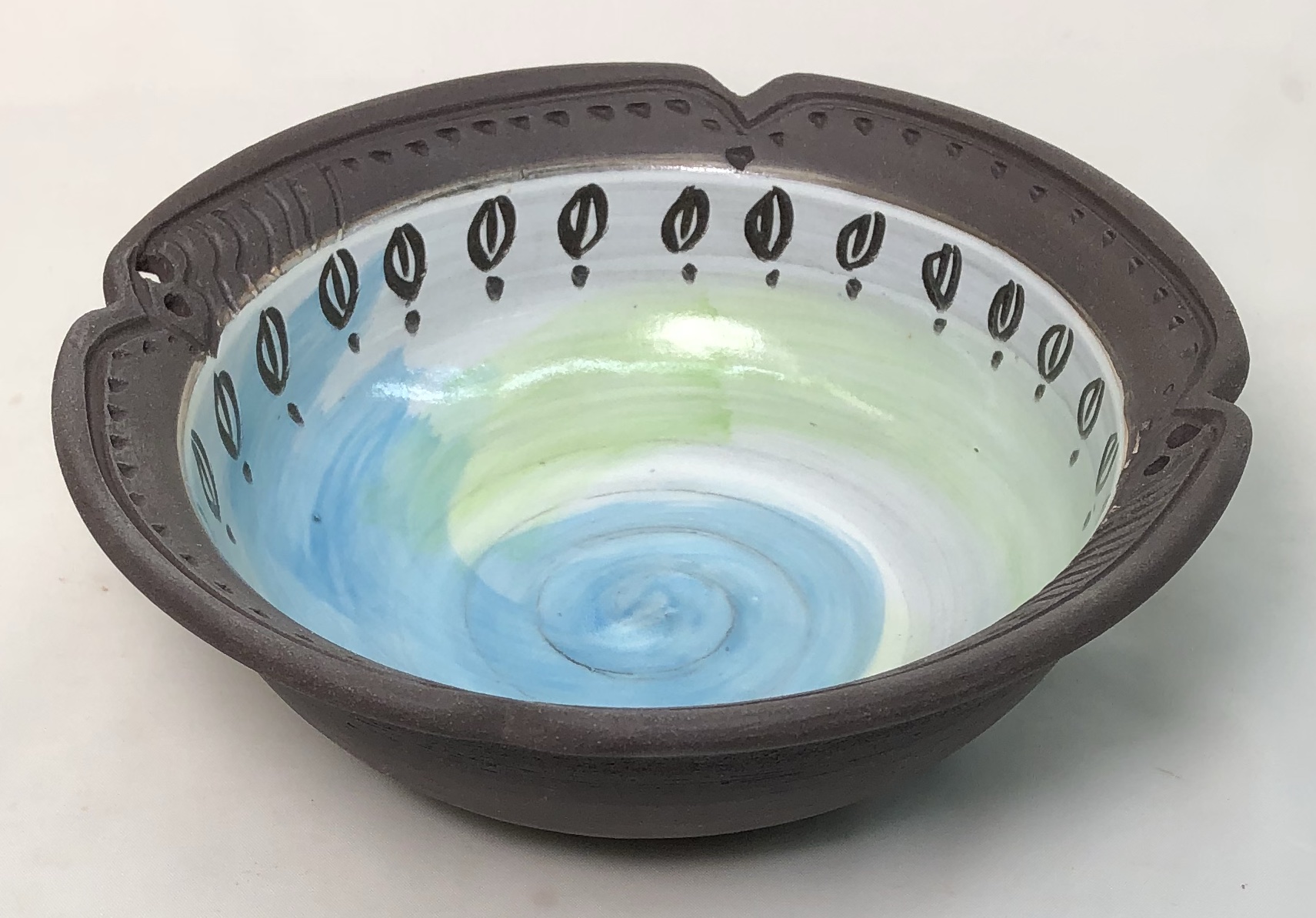 These Coffee clay mugs have been white L3954B engobed at leather hard stage on the insides (the center one partway down the outside). After bisque the left and right ones were white-glazed on the inside (using G2926B+10 Zircopax). The one on the right has GA6-A (Frit 3195 version) on the outside (the center mug inside and out). The GA6-A over the black clay produces a very deep, rich ultra-gloss surface. The mug on the left has Ravenscrag floating blue (GR6-E) on the outside (producing a very right color over the Coffee clay). 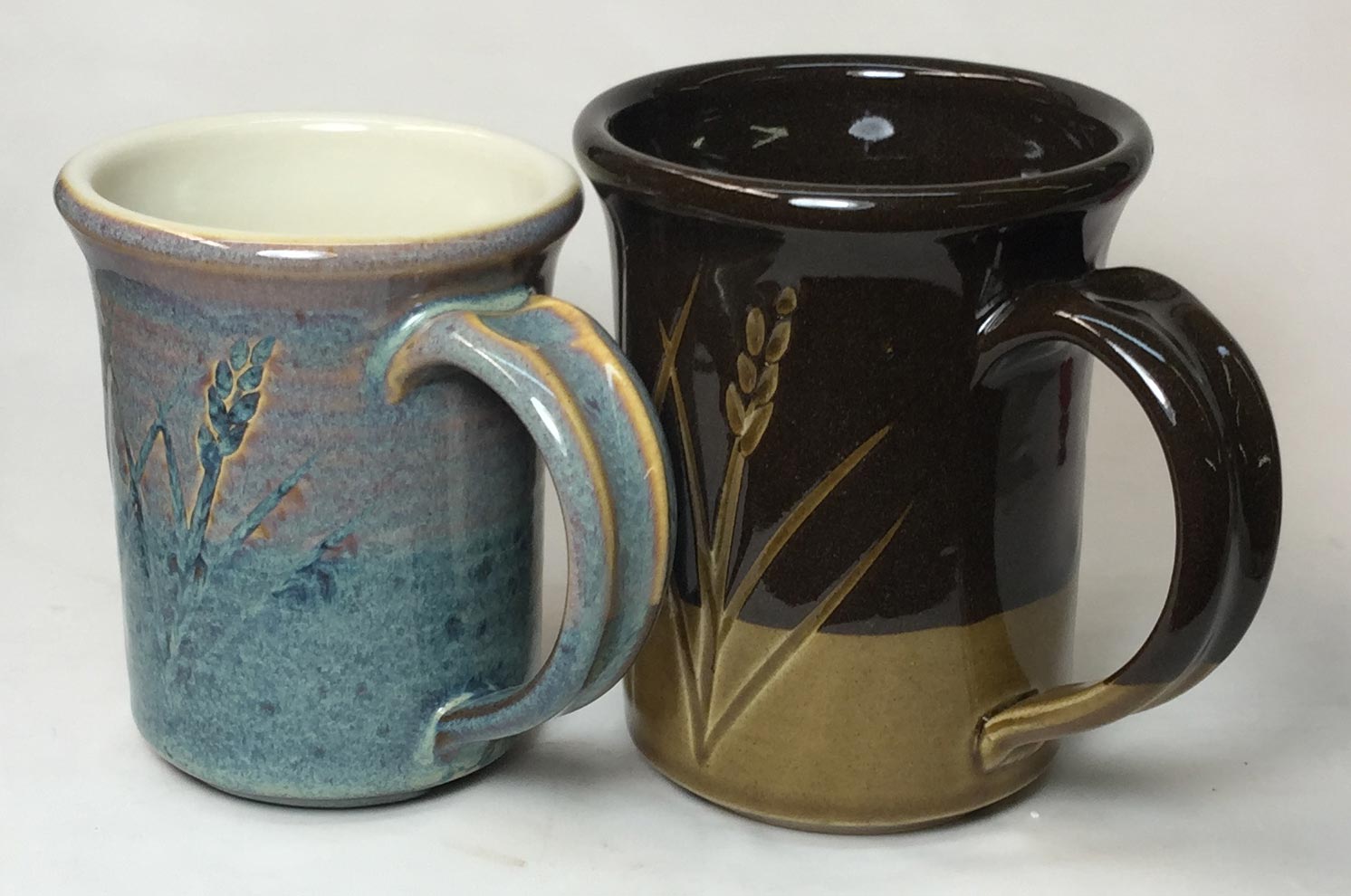 Left: Coffee clay with L3954B white engobe inside and partway down the outsides. The liner glaze is Plainsman whiteware clear G2926B. Outside glaze is GA6-C Alberta Slip Floating Blue. Right: M340 with black stain replacing the Zircopax in the engobe recipe. It is glazed inside and out with Alberta Slip base GA6-A (using Frit 3195 as the flux). 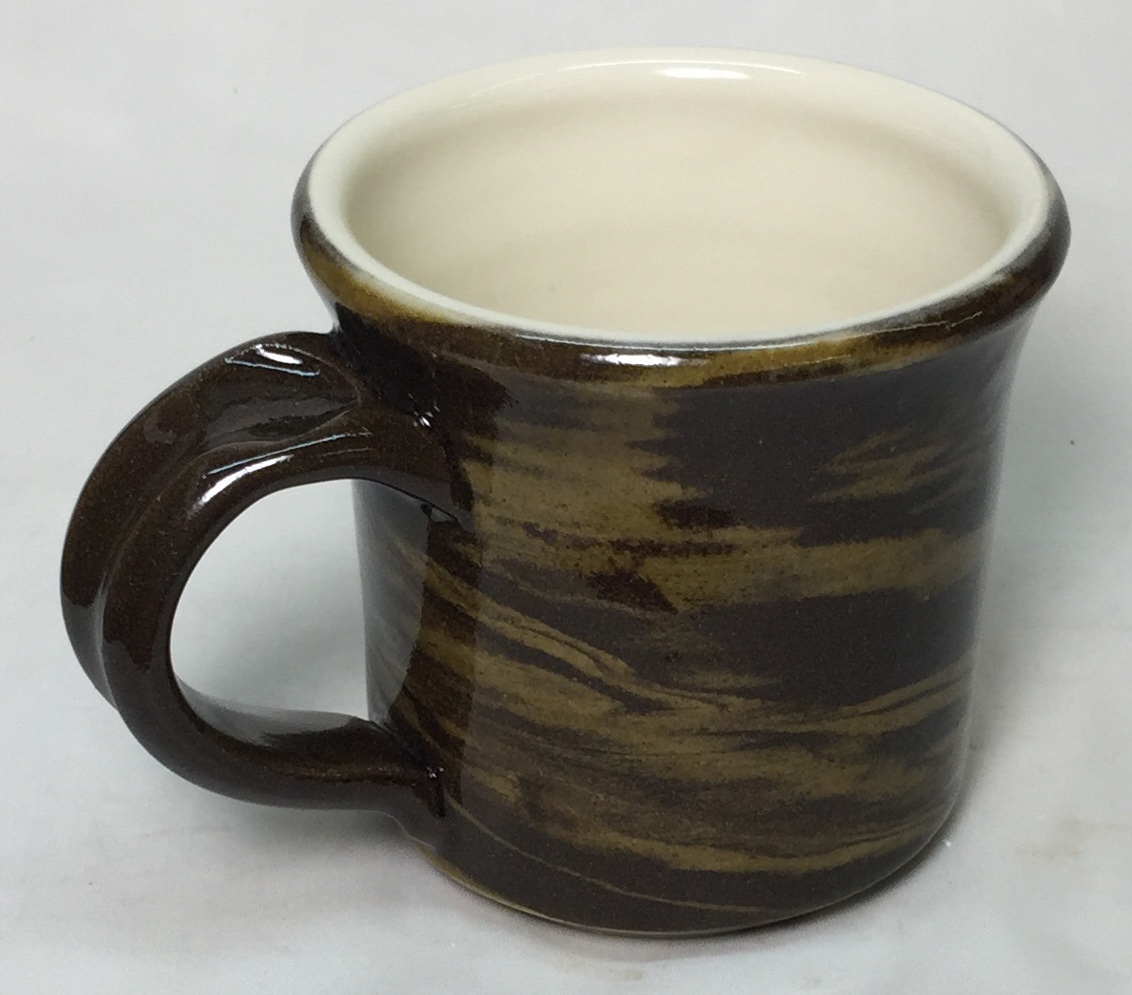 Coffee and M340 marbled. Inside is L3954B engobe and G2926B clear glaze. Outside glaze is Alberta Slip base GA6-A (using Frit 3195). The GA6-A is used because it does not develop micro-bubble clouds as do normal clear glazes on this body. 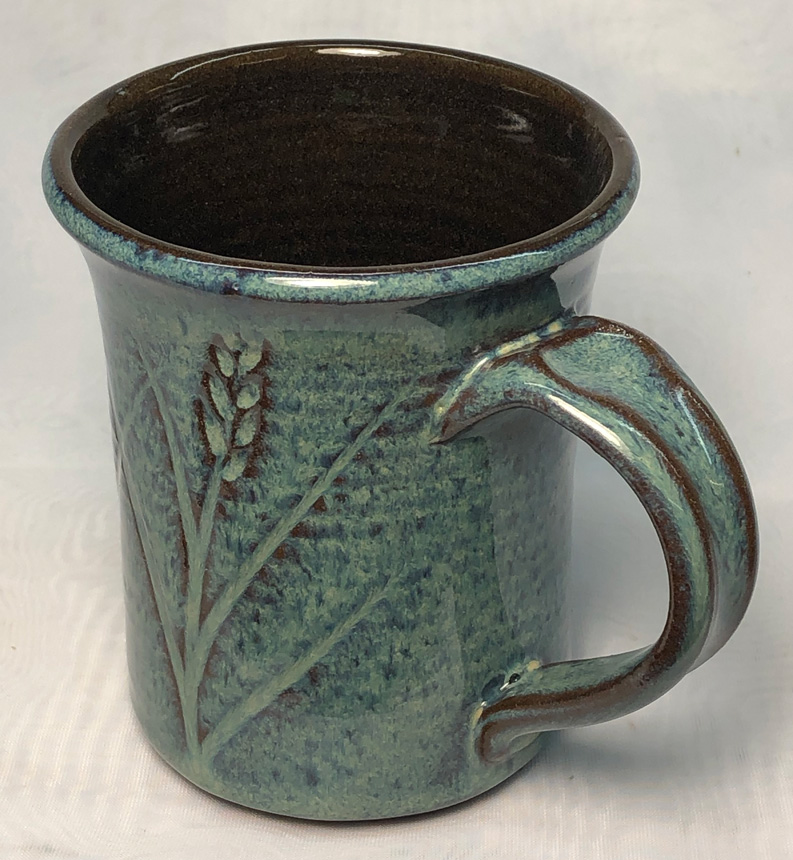