The base cone 6 glaze recipe, it is just 80% Alberta Slip and 20% frit (Ferro 3195 preferred, also 3134) and produces a well-melted amber transparent. It is very useful itself as a cover and liner glaze and can become much more if slow cooled (to form surface crystallization) and with additions (e.g. to form cobalt-free floating blue).

Clear glazes often do not work on dark bodies. The center mug is clear-glazed with G2926B (and is full of bubble clouds). This dark body (M390) is exposed inside and out (the other two mugs have a white engobe inside and midway down the outside). G2926B is an early-melter (starting around cone 02) so it is susceptible to dark-burning bodies that generate more gases of decomposition.

Left mug: The outside glaze adds 4% iron to G2926B (the glaze was not screened, so iron particles are agglomerated and acting as a fining agent, removing the bubbles). Right mug: The whole thing is glazed with GA6-B Alberta Slip base glaze. These amber glazes have an added benefit: The color darkens over dark burning bodies (to almost black). 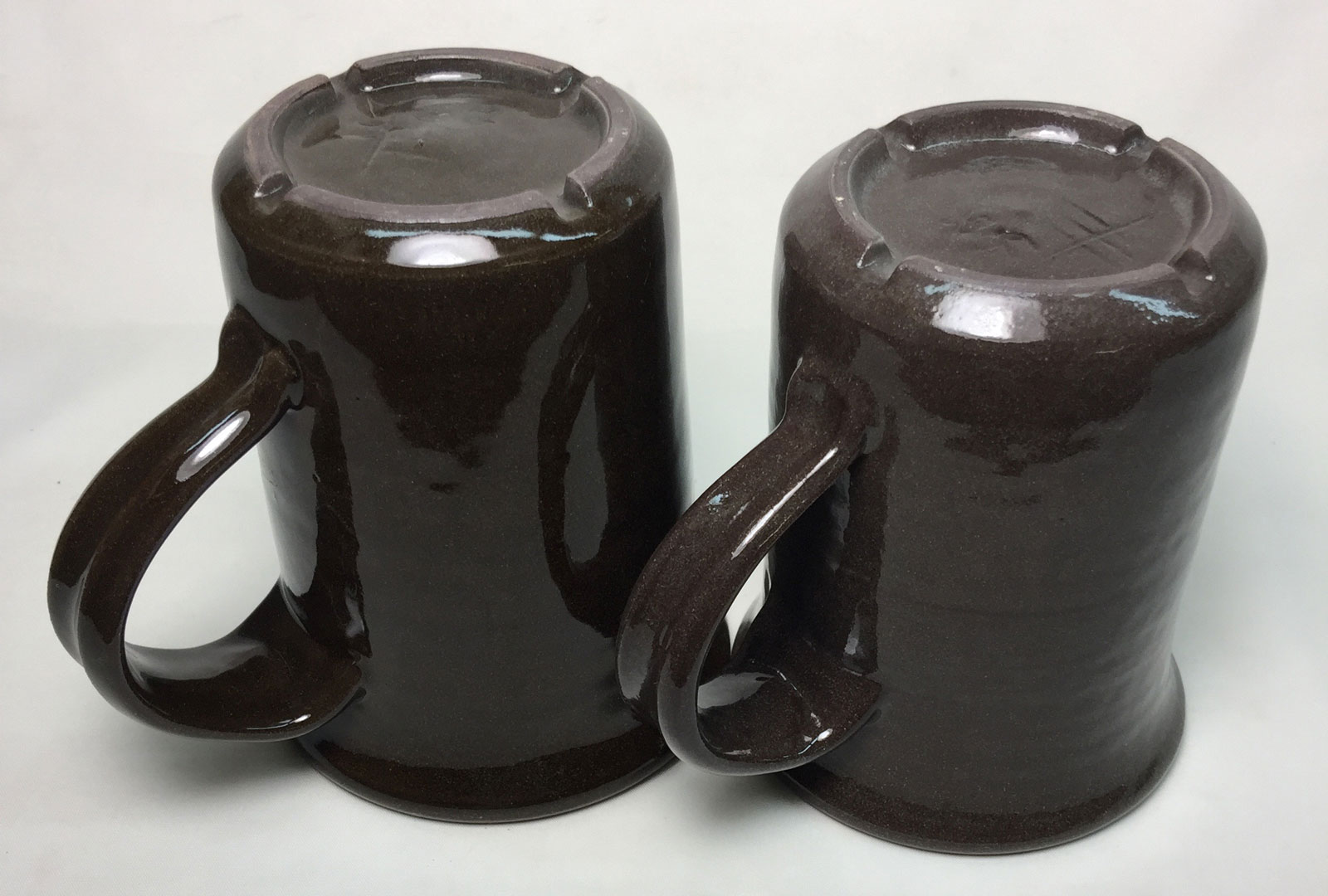 Coffee Clay fired at cone 6 with transparent glazes. The Alberta Slip GA6-A glaze (left) is clearly better that the G2926B on the right. This firing is schedule C6DHSC, a 100F/hr slow cool to 1400F. The glaze is the right certainly has fewer bubbles than normal, but still is not nearly as good as the one on the left.

It is standard practice to fire cone 6 using a hold (or soak) at top temperature schedule (e.g. for 30 minutes), this reduces surface defects. However, to produce a defect-free glaze we recommend a drop-and-hold firing like the PLC6DS schedule. 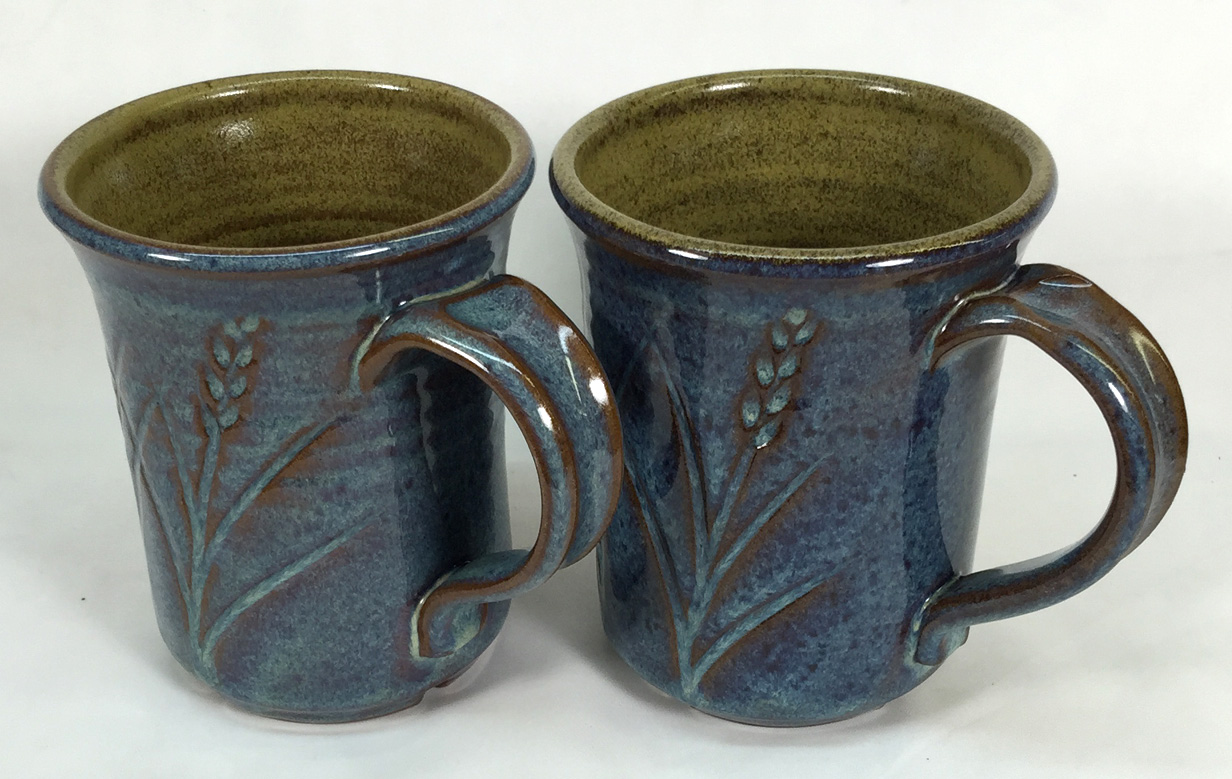 The GA6-A glaze on the insides of these mugs has crystallized during cooling (it fast-cools as a transparent amber). This happened because we used the C6DHSC firing schedule, it drops at 150F/hr down to 1400F. The crystallizing in this recipe can be prevented by adding 1% tin oxide (the GA6-B recipe does not crystallize).

When mixed with water to create a thixotropic slurry, this will perform was as a dipping glaze. It will apply evenly to bisque, produce minimal dripping and dry within seconds. It will be adequately durable for handling. If bisque walls are thin, it will be necessary to glaze the inside and outside of pieces as separate operations (with a drying time between).

If you are glaze laying (using this as a dipping glaze and painting a commercial gummed brushing glaze over it) there is a risk of crawling. It may be necessary to add some gum to this, converting it from a dipping glaze to a base-coat dipping glaze.

More information about this recipe can be found at digitalfire.com, click the following: GA6-A. See also the Alberta Slip page.

This glaze is most often prepared using the traditional method of simply adding water until the desired consistency is achieved (do the initial mix with 85 parts water and 100 powder). We find that 1.45 specific gravity works for us using our tap water. No flocculant additions are generally needed and application properties are very good as long as the slurry is not too viscous or too runny (dries quickly on bisque without cracking and, after dipping, there is minimal dripping). 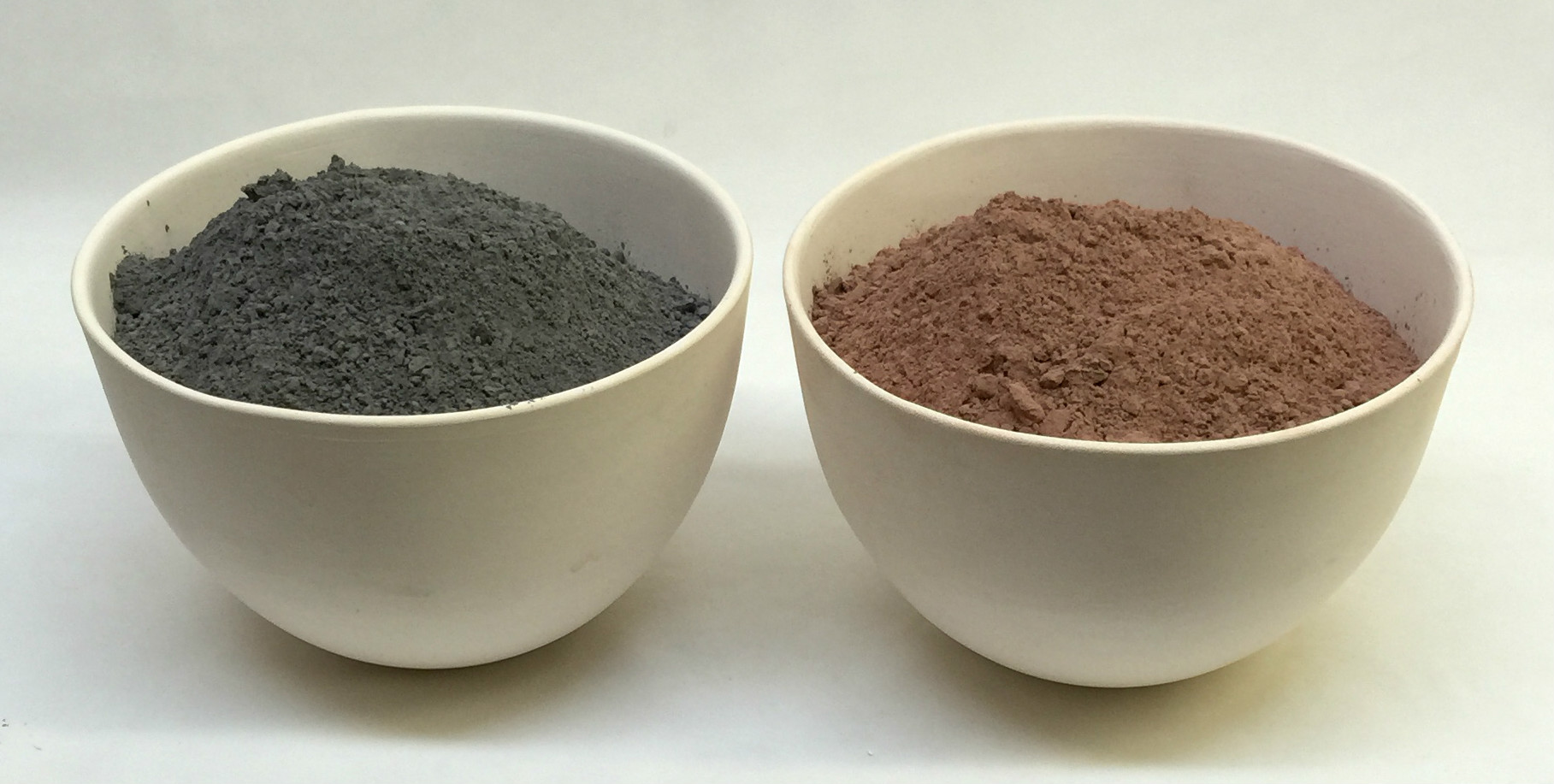 Left: Raw Alberta Slip powder. Right: Roasted at 1080F. This is a plastic clay, thus it has a significant drying shrinkage. Where a glaze is applied thickly or the percentage of Alberta Slip is high, shrinkage cracks (which produce crawling during firing) will occur. We recommend a mix of roast and raw material in recipes. Roasting the Alberta Slip powder at 1000F greatly reduces the shrinkage. Use a firing rate and hold-time-at-1000F appropriate for the wall thickness and size of your bisque vessels (e.g. 500F/hr and 30 minutes for thin walled small vessels, slower and longer hold for large ones). If any of the powder within is black, increase hold time. Adjust proportions as needed (more roast if the glaze cracks on drying or more raw if it is drying too powdery or not bonding well). 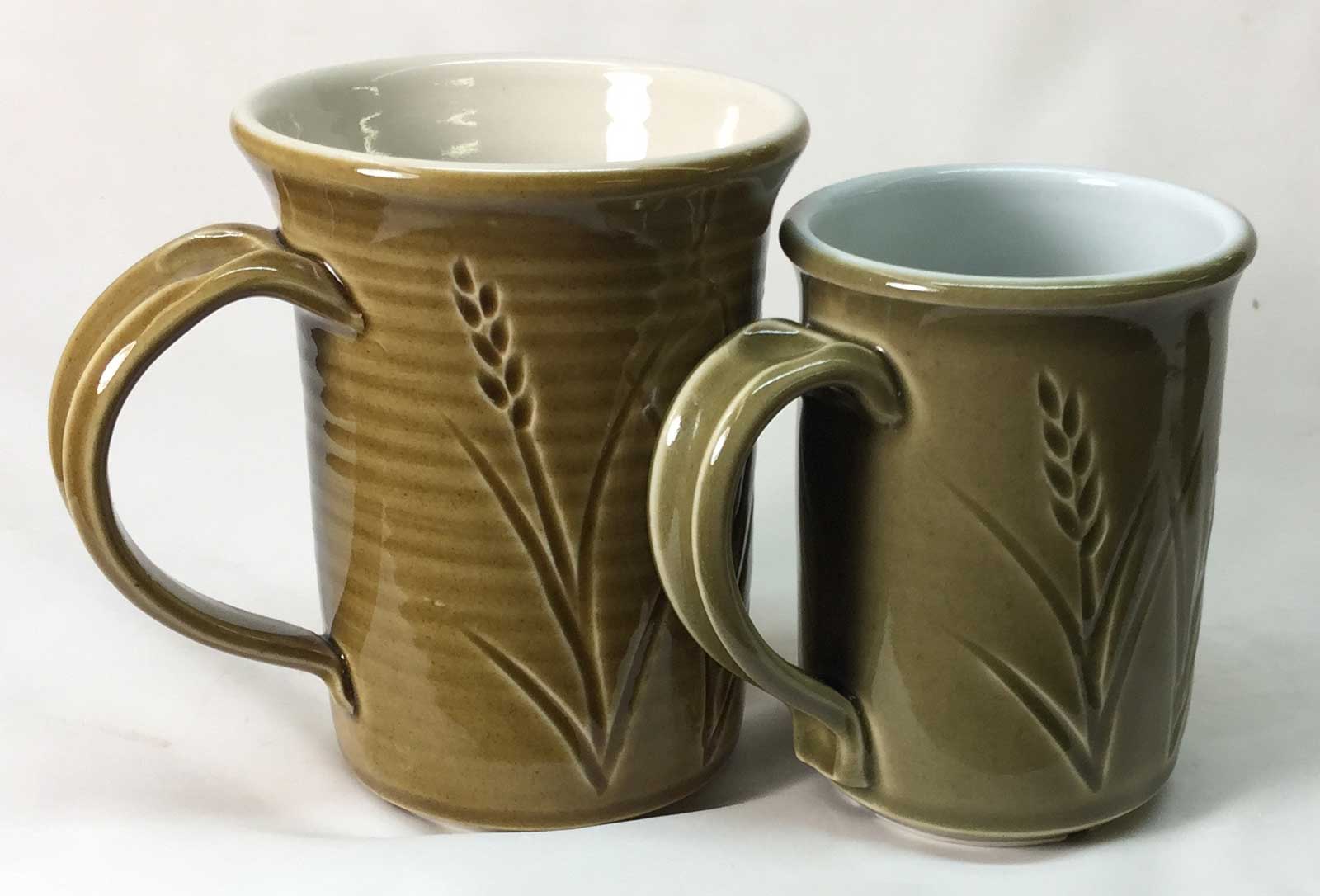 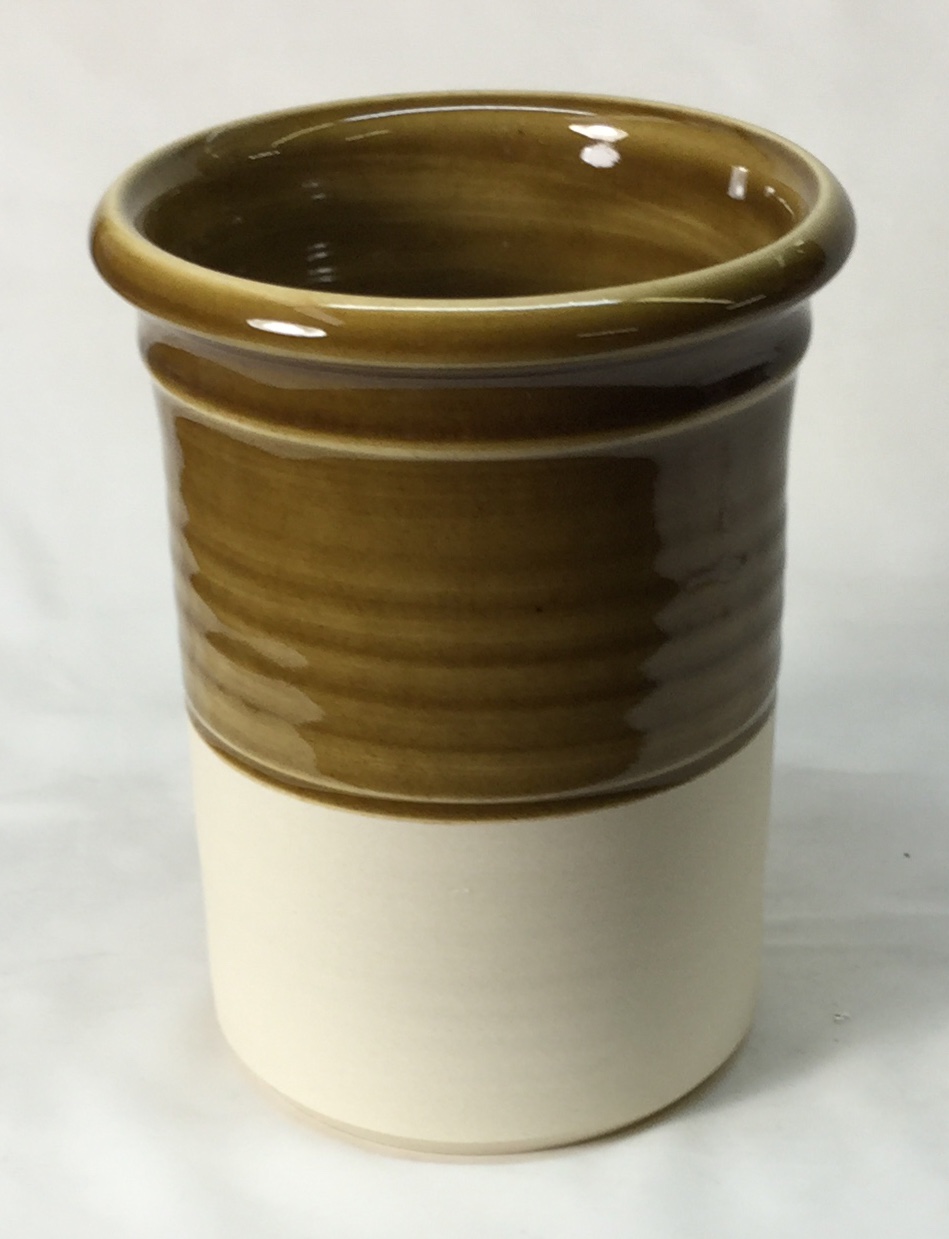 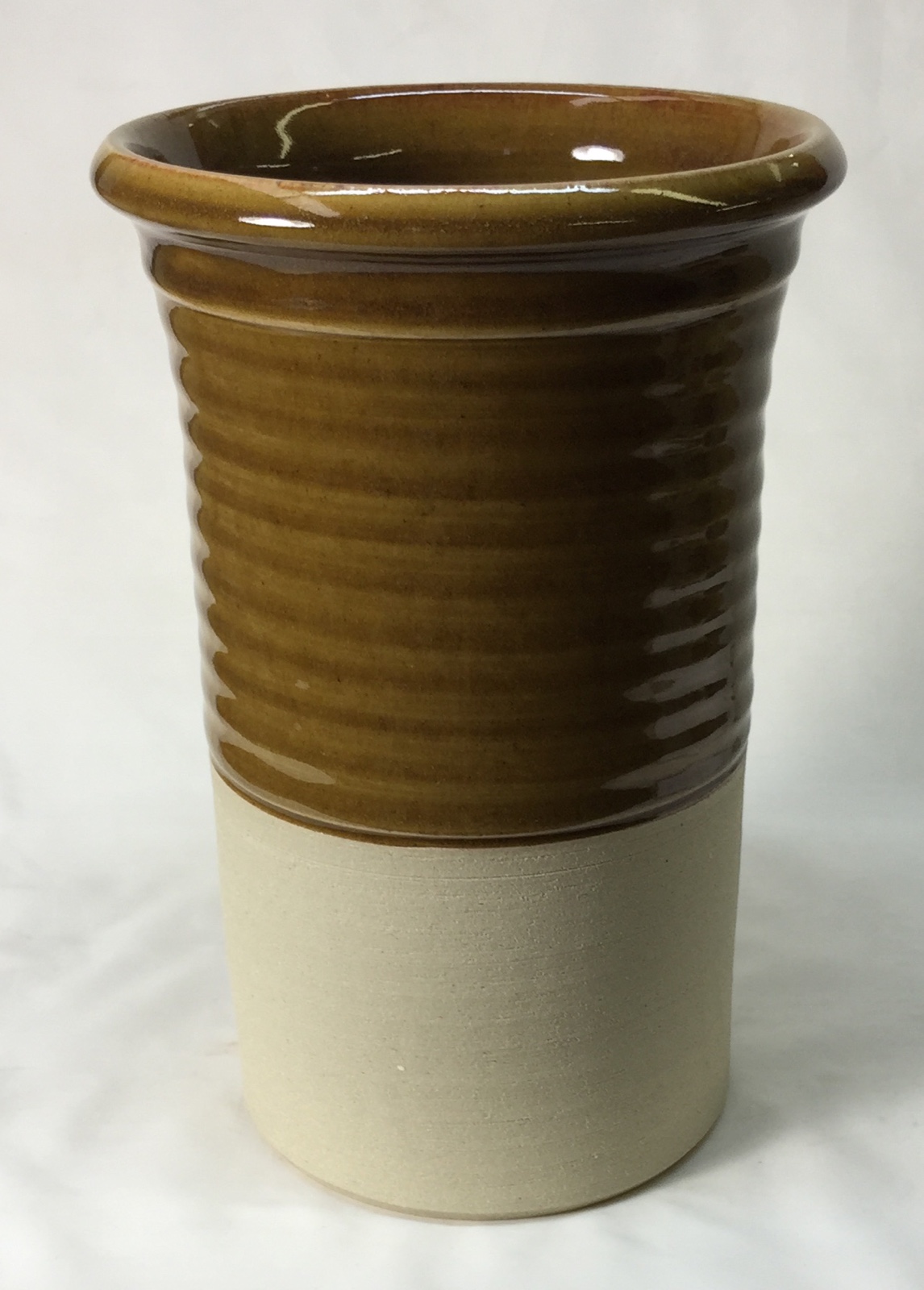 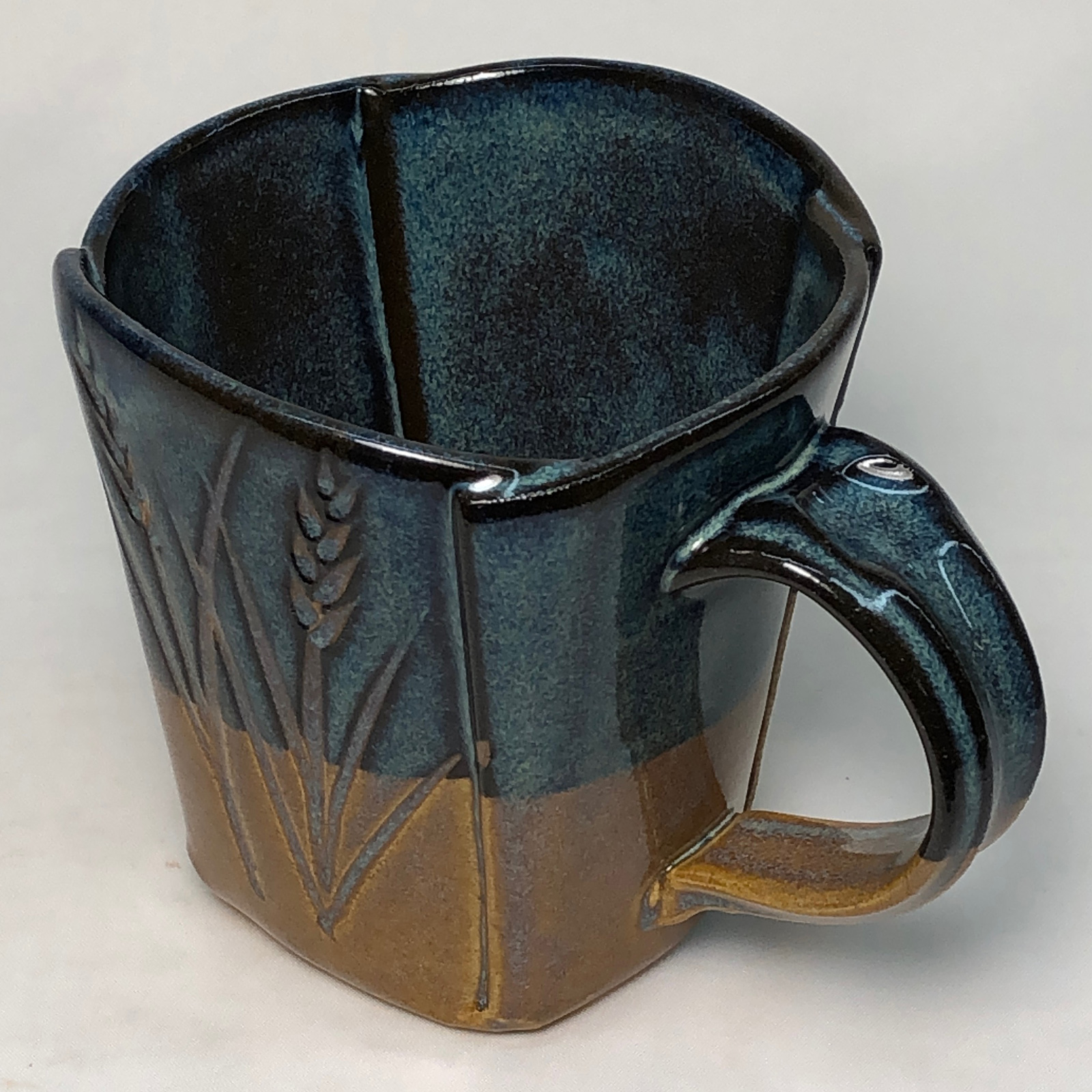 M340 with Alberta Slip GA6-C rutile blue glaze. Cone 6. L3954B black engobe was applied inside and half way down the outside during leather hard stage. 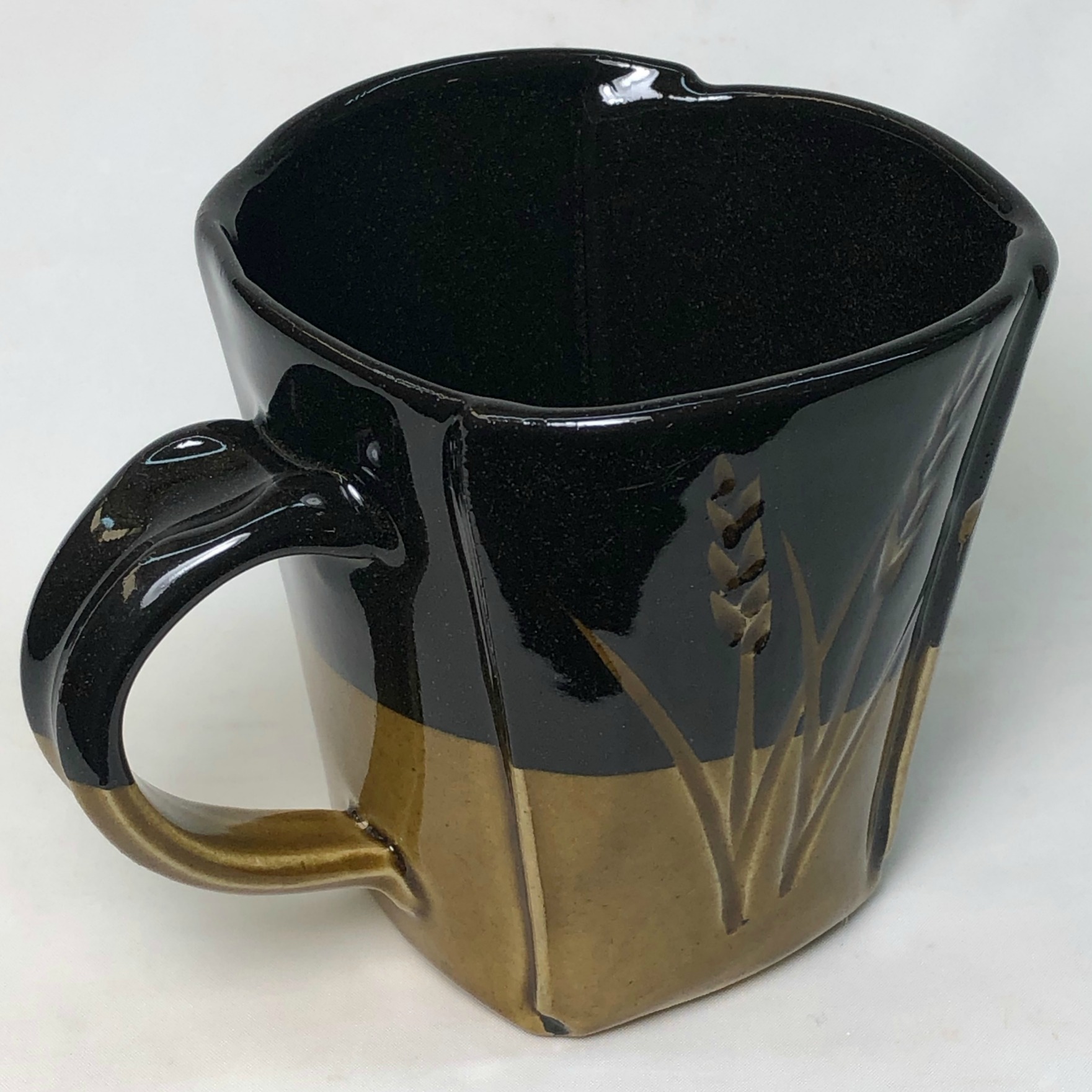 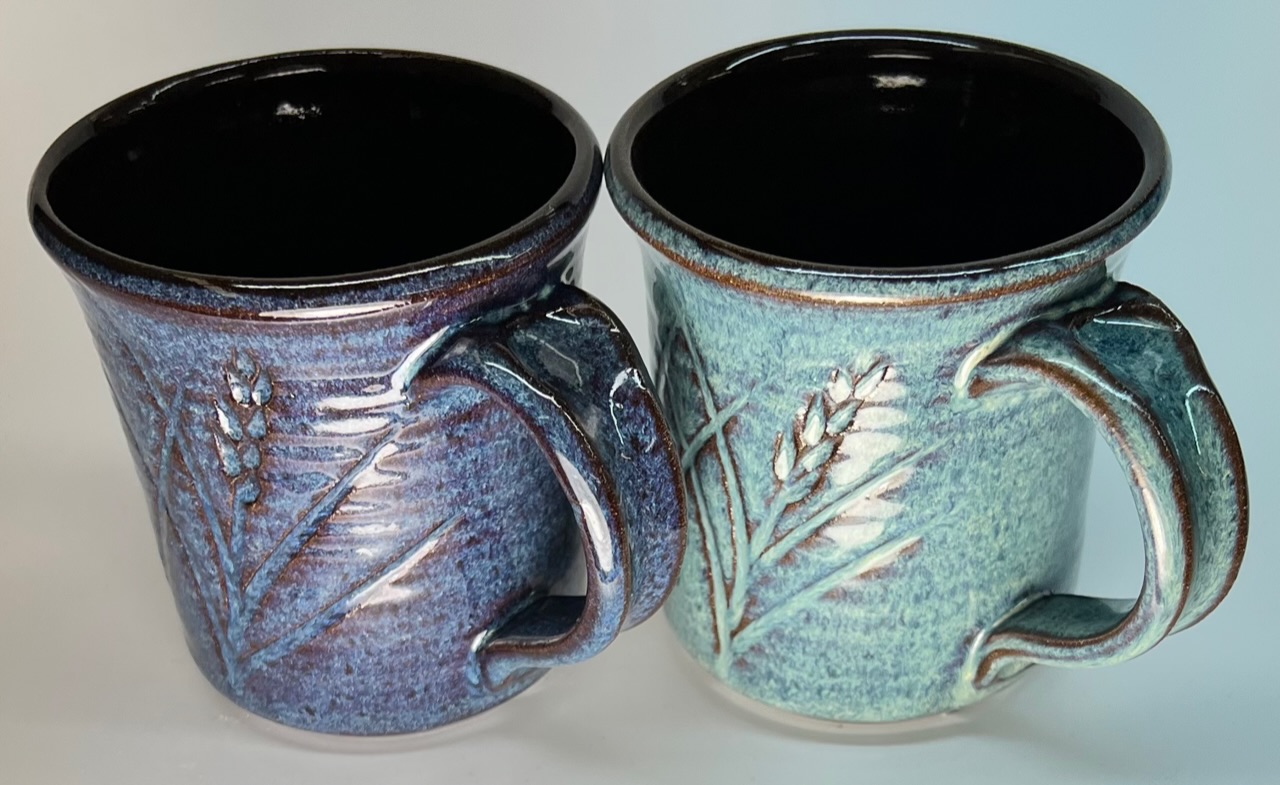 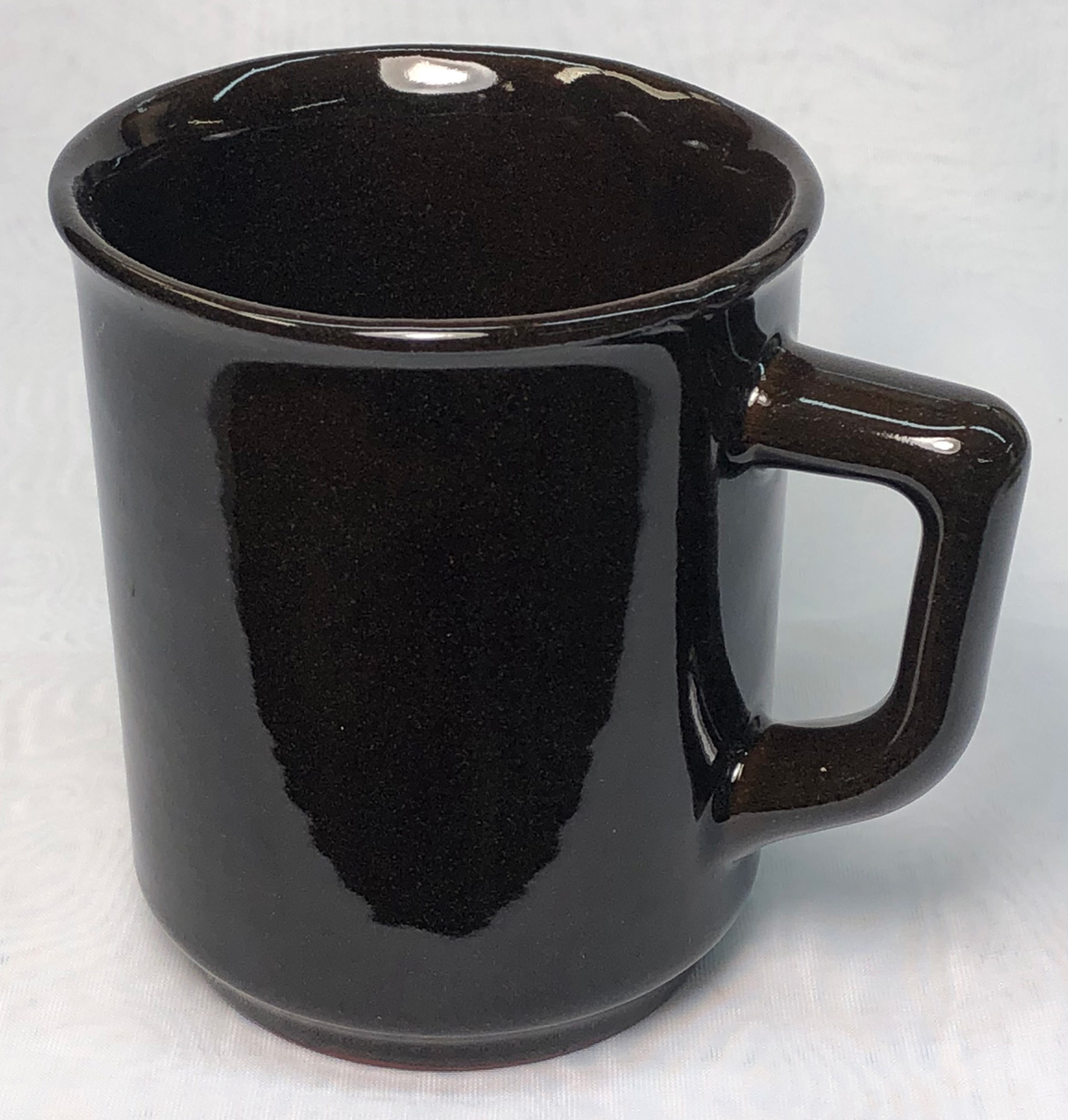